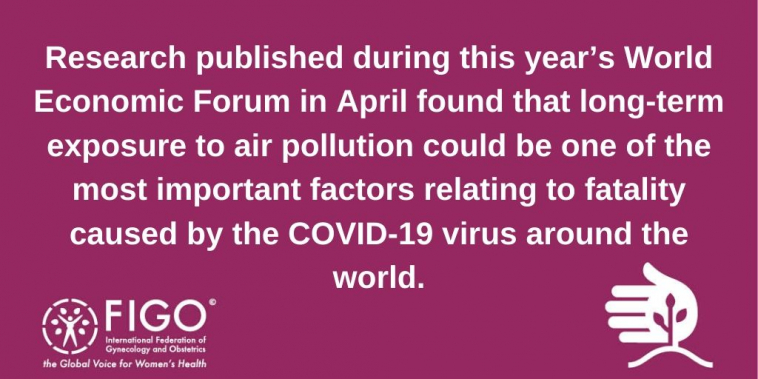 As time passes and more data becomes available, many studies have demonstrated a concerning link between air pollution levels and COVID-19 rates.

Research published during this year’s World Economic Forum in April found that long-term exposure to air pollution could be one of the most important factors relating to fatality caused by the COVID-19 virus around the world. The research found that 78% of deaths (out of four countries that had the highest rates of the virus) had occurred in five regions in northern Italy and Spain, and these regions have the highest concentrations of the harmful pollutant nitrogen dioxide (NO2).

It is widely known that those with pre-existing health conditions are at highest risk of mortality from the virus. Many of those conditions are the same diseases that are affected by long-term exposure to pollution. The same study found that only a small increase in fine particulate matter led to a sharp increase in COVID death rates.

Air pollution has disastrous effects on women’s health issues. Research has shown that air pollution is associated with a diverse set of outcomes, from altering the production of sperm and eggs to epigenetic changes and birth defects. Exposure to endocrine-disrupting chemicals (EDCs) which happens via the inhalation of these man-made chemicals present in the air and through the skin, can have an effect on both male and female fertility. They can also be transferred from mothers to children across the placenta and through breast milk.

At the time of writing, around one third of the population of the world is currently on lockdown and in isolation. Globally, air pollutants can be two to five times higher indoors than outdoors. This can also be a particular threat in low and middle income countries where around 3 billion people still cook using solid fuels (such as wood, crop wastes, charcoal, coal and dung) and kerosene in open fires and inefficient stoves, creating an environmental risk that could have a significant impact on fertility and health during pregnancy.

Physiological changes during pregnancy, such as a 40% increase in the amount of air pregnant women breathe per minute as well as a 50% increase in how hard their hearts work, make pregnant women particularly vulnerable to pollutants. Recent work by FIGO in Collaboration with HEAL shows that prenatal exposure to air pollutants PM2.5 and ozone contribute to adverse pregnancy outcomes, including preterm birth and low birthweight. So, those in low-middle-income countries who are constantly exposed to high pollution levels indoors and are unable to leave their house may be at a higher risk of complications. This is the unintended result of the Coronavirus for those in low-middle-income countries

But there is an obvious positive knock-on effect of much of the world being on pause: the lack of frequent road and air transport means that harmful air pollutant levels have seen to be decreasing around much of the world. Research published in The Lancet estimatedthat improved air quality during the COVID-19 quarantine period avoided a total of 8911 Nitrogen Dioxide-related deaths, 65% of which were from cardiovascular diseases.

FIGO’s Reproductive and Developmental Environmental Health Committee has published a resource highlighting actions we can take in order to reduce air pollution and protect pregnant women. Find the infographic here[C3] .

Globally, minimising environmental threats to human health and reproduction is a necessity if we are to progress towards the 2030 Agenda for Sustainable Development (SDGs). COVID-19 now poses additional hurdles to governments and stakeholders, but it is hoped that all will continue to collaborate in order to help those most vulnerable in society, in the safest way possible without sacrificing on quality and frequency of care.