Progress towards each SDGs target is measured through a set of indicators, however the data used can be subject to large gender differences. 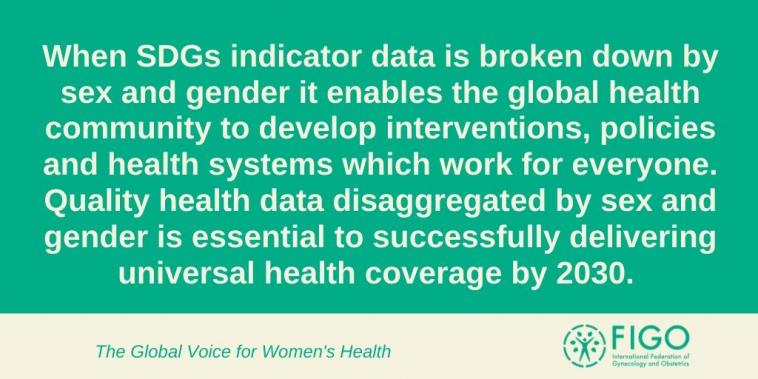 The Sustainable Development Goals (SDGs) aim to bring about lasting, positive change for everyone by addressing key global challenges. Progress towards each target is measured through a set of indicators.

However, progress has stalled or even reversed in many areas, and some indicators have not yet been reported. Out of nine health-related SDGs indicators with explicit targets to achieve by 2030, currently only one target is on track: reducing the mortality rate of newborns and children under five.

In some instances, indicator monitoring data is broken down by sex and gender, so that it can be used to analyse gender differences in health outcomes.

Some differences are biological – for example health issues connected to pregnancy – but most differences are socially constructed, linked to gender norms and patterns of inequality in a society. For example, in many settings men are more likely to be injured in traffic accidents than women because they make up the majority of road and transport workers.

The World Health Statistics 2019 report reviewing SDGs indicator data highlights a number of these gender differences. One area of difference is environmental health: mortality rates attributed to air pollution and unintentional poisoning are 1.27 times higher in men than in women, while the global mortality rate attributed to unclean water, poor sanitation and lack of hygiene is 1.06 higher in women.

The report also reveals that the availability of country data for global SDGs reporting is currently very mixed:

Inconsistent or poor quality data will slow progress towards better health and wellbeing worldwide, and the problem is particularly prevalent where women and children are concerned.

The specific cause of death relating to maternal mortality is not always recorded. Without this information, it is more difficult for public health workers and policymakers to demonstrate the need for interventions to manage infection or raise awareness of hygiene standards that could prevent sepsis.

Collecting and using good quality, consistent data which is disaggregated by gender (and other dimensions) is important for monitoring and accelerating progress towards global health goals. Robust data provides an important evidence base through which to identify the most effective interventions, decide how to allocate resources, and drive improvements in care.

The need for better health data – especially about the experiences of women and girls – is becoming more widely recognised in the global health community.

In 2019 the G7 Gender Equality Advisory Council report called on all G7 states to ensure health data disaggregation based on sex, age, location, disability, family status and other relevant indicators. The report also encouraged states to build up and disseminate an evidence base about the impact of girl and woman-centred care, as well as girls’ and women’s self-reported testimony.

To improve the quality of SDGs monitoring data the World Health Organization (WHO) has developed SCORE, a programme to help countries to strengthen their health data systems and their capacity to track progress towards the Global Goals.

Last year’s ground breaking UN Political Declaration of the High-Level Meeting on Universal Health Coverage, gave us a critical roadmap for delivery, containing recommendations to improve capacity for health data collection and analysis, to achieve evidence-based decisions at all levels. As a result of contributions by FIGO and many of our valued partners, the Declaration provided an explicit commitment to “mainstream a gender perspective on a systems-wide basis when designing and implementing health policies”.

When SDGs indicator data is broken down by sex and gender it enables the global health community to develop interventions, policies, and health systems which work for everyone. Quality health data disaggregated by sex and gender is essential to successfully delivering universal health coverage by 2030.