Tagged in
Global
Health for All 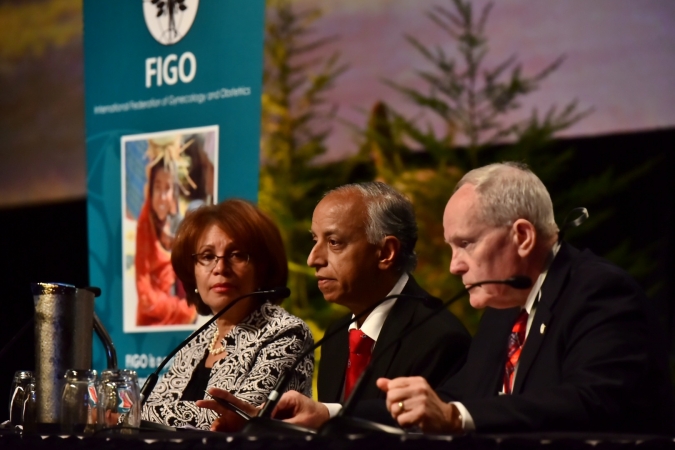 Vancouver, BC, Monday, October 5, 2015 - The International Federation of Gynecology and Obstetrics (FIGO) - representing 125 national societies of obstetricians and gynecologists worldwide - and its global stakeholders and partners announced today at the XXI World Congress of Gynecology and Obstetrics President’s Session key actions to achieve the recently adopted UN Sustainable Development goals 3 and 5 targeting global women's and children's health and gender equality.

Last week in New York City, more than 150 world leaders unanimously adopted the United Nations Sustainable Development agenda aimed at ending poverty and promoting prosperity by 2030. “FIGO’s vision and mission perfectly encapsulate goals 3 and 5,” says Professor Sir Sabaratnam Arulkumaran, FIGO President. “Helping to realize this global development agenda is our public health responsibility. We must help to enhance and enable our national society members’, stakeholders’ and partners’ capabilities to achieve these goals and ultimately aid all globally.” The reduction of maternal mortality can be attributed to three areas: good contraceptive coverage (a possible reduction of 30 per cent), achieving safe abortion care (15 per cent) and emergency obstetric and medical care (55 per cent). FIGO is working steadily in all three areas.

The ICM and FIGO have enjoyed a decades-long relationship focused on improving the health and wellbeing of childbearing women and their babies,

The newly launched SDGs present a perfect opportunity for building and extending this partnership as we work together to achieve the SDGs for the benefit of women’s, newborns’, children’s and adolescents’ health.

The IPA is proud to work in close partnership with FIGO and ICM. The ten focus areas for IPA action, advocacy and education range from the survival of newly born babies to supporting a healthy adolescence,

Our emphasis is ensuring that children and adolescents not only survive but thrive today and tomorrow.

Professor Marleen Temmerman, Director, Department of Reproductive Health and Research, WHO, also adds that discrimination, gender inequality, lack of political will, societal norms and structural failures mean that women and girls often miss out on life-saving health services and experience serious violations of their human rights.

We know what works and what we can do to make a difference. While there is no magic bullet, there are also no excuses. WHO is committed to working with FIGO and partners to stand behind the new Global Goals for sustainable development and the Global Strategy for Women’s, Children’s and Adolescents’ Health,

The latest information on FIGO projects, publications, guidelines and supplements can be found on www.figo.org and www.ijgo.org