Climate, environment and health - the link 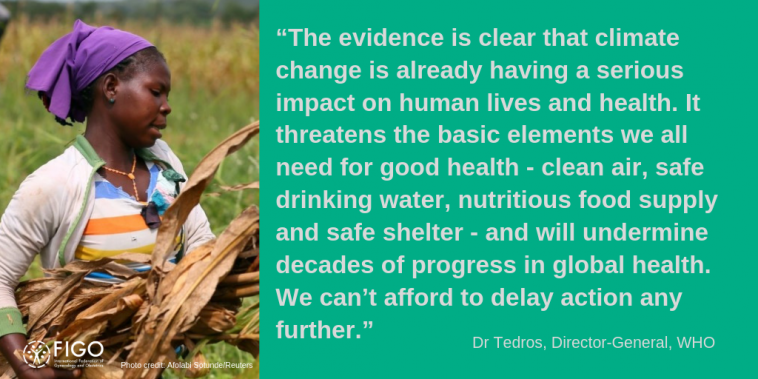 Overwhelming evidence shows that human activities have had an impact on the global climate.

The global health community is increasingly linking health issues with pollution and climate change. WHO reports that ‘Climate change threatens to undermine over half a century of global improvements in health achieved with dedicated, targeted action. This puts our shared commitment to health and wellbeing for all at risk.

Each year millions of people are affected by natural and man-made disasters around the world. Climate change is directly resulting in increased cyclones, heatwaves, droughts, wildfires and floods and indirectly impacting on air quality and water quality, including access to water and sanitation necessary for safe maternal delivery.

In many of the world’s most vulnerable communities’ these extremes are widening health inequities.

Last month, Cyclone Idai swept across Mozambique, Malawi and Zimbabwe, the worst natural disaster to hit south eastern Africa in decades. Electricity supplies have been destroyed, roads and bridges have been swept away, affecting access to food, medicines and health facilities. Millions have been affected, people have been displaced.

UNFPA have reported that the “cyclone affected more than 75,000 pregnant women, with 45,000 births expected over the next six months, 7,000 of which are at risk of ‘life-threatening complications’ due to the flooding and destruction”. These higher rates of risk for complicated pregnancies may result in severe injury or death.

The flood waters from Cyclone Idai are now receding in Mozambique, Malawi and Zimbabwe, but there are ongoing risks, causing the needs of women and families escalate. Care and attention from health professionals is critical for supporting survivors to heal, recover and thrive.

Malaria The risk of malaria and other vector borne diseases is increasing. Pregnant women are particularly vulnerable to malaria, as pregnancy both reduces immunity and makes the complications, including increased risk of miscarriage, premature delivery, severe maternal anaemia, and low-birth-weight babies, far more serious.

Exploitation and sexual violence Population displacement is known to increase tensions and potentially the risks of conflict within countries. For women, this tension is known to increase risk of exploitation and sexual violence when they are dislocated from their communities. While data on the prevalence of such violence in humanitarian contexts is limited, research suggests that approximately one in five displaced women in complex humanitarian settings have experienced sexual violence. In addition to the human cost, there are high economic and social costs for individuals, families, communities and societies.

Globally, minimising environmental threats to human health and reproduction is a necessity if we are to achieve health and wellbeing for all. In December 2018, WHO launched the COP24 Special Report Health and Climate Change  addressing links between climate change and health, raising awareness of the significant health threats and offering solutions.

FIGO is pleased to collaborate with the global health community to advocate and increase engagement on the links between climate, environment and health.  Earlier this year, we shared our statement on the draft WHO global strategy on Health, Environment and Climate Change. It stated that we are committed to using our broad experience and expertise to address the associated risks of health, environment and climate change. FIGO will collaborate with the WHO to help deliver the transformation needed to improve lives and well-being through healthy environments.