FIGO at 65: every woman's choice

As FIGO celebrates 65 years as a federation, Dr Dorothy Shaw, FIGO Past President 2006-2009 looks back on her Presidency which was underpinned by a focus on sexual and reproductive rights. 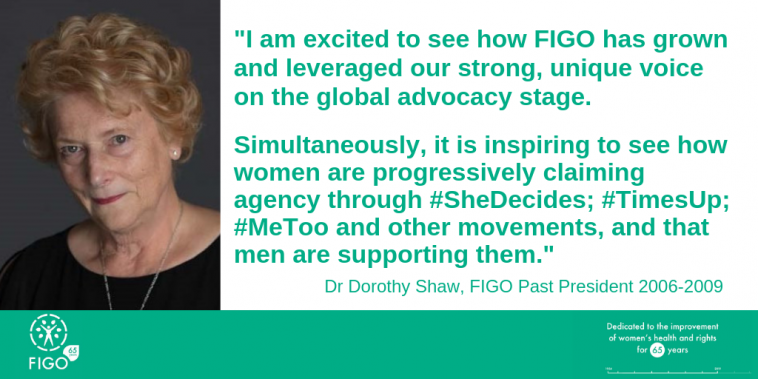 Respect, advocacy and inclusion have been hallmarks of FIGO’s work for the past 65 years.

This month, as FIGO celebrates 65 years as a federation committed to improving the health and wellbeing of every woman worldwide, Dr Dorothy Shaw, FIGO Past President 2006-2009 looks back on her Presidency which was underpinned by a focus on sexual and reproductive rights.

“The Plan of Action from the 1994 International Conference on Population and Development (ICPD), adopted by 179 member states, reaches its 25th anniversary in November. The document remains visionary: comprehensive and explicit about "the right to decide freely and responsibly the number, spacing and timing of their children and to have the information and means to do so, and the right to attain the highest standard of sexual and reproductive health.”

FIGO, who this week celebrates the 65th anniversary since our foundation, recognises that there are still gaps but is proud to have played our part in making progress that supports this important document. During my Presidency this included developing important FIGO Guidelines on appropriate medical management of sexual assault (2009) and organisational capacity building aimed at reducing maternal newborn mortality and morbidity through strengthening national societies to be more effective in evidence based advocacy and policy as well as education. Cervical cancer prevention and management also began to be a focus for FIGO beyond the cancer staging classification for which FIGO was well known.

All these factors were relevant in FIGO launching the Prevention of Unsafe Abortion initiative during my Presidency. Prevention of Unsafe Abortion remains the largest FIGO project ever undertaken due to an unprecedented response from 43 of the, then, 113 National Member Societies, given the recognition of this relevant, significant and preventable cause of maternal mortality and morbidity in each of their countries.

This evidence driven initiative was funded by a grant from an anonymous donor for over a decade and led by Professor Anibal Faúndes and supported by a steering committee of global experts.  Country specific action plans, in collaboration with national Ministries of Health and other global and national partners were submitted and monitored, through the leadership, mentorship and support of FIGO. Action plans included systems issues such as access to information, education and services for effective contraception, best practice for post-abortion care, access to safe abortion within the limits of the law in country, including following violence and sexual assault.

Accountability and support were also integrated into our annual Regional meetings where each National Member Society with their Ministry of Health presented results and shared progress and challenges of the Prevention of Unsafe Abortion Initiative. FIGO has recently applied for funding to continue what our National Member Societies still identify as a significant problem for the women and girls of their countries, including married women with children, adolescents and displaced populations.

I am excited to see how FIGO has grown and leveraged our strong, unique voice on the global advocacy stage. Simultaneously, it is inspiring to see how women are progressively claiming agency through #SheDecides, of which current FIGO President Dr Carlos Fuchtner is a Champion; #TimesUp; #MeToo and other movements, and that men are supporting them. In many societies, increased involvement of men and leadership, is necessary to change the culture.”

FIGO’s current Advocating for Safe Abortion Project builds on these initiatives, and on the areas of focus during Dr. Shaw’s Presidency, and is working more intensely with ten National Member Societies in Africa and Latin America. The project’s aims include:

In November, FIGO will head to Nairobi for ICPD25. The ICPD Plan of Action remains unfinished and we will repeat the visionary ask for all women and girls to have "the right to decide freely and responsibly the number, spacing and timing of their children and to have the information and means to do so, and the right to attain the highest standard of sexual and reproductive health”.