Now FIGO is 65. Let us hope that in the coming years FIGO and all 132 member societies will be able to contribute to a world where quality reproductive health care is available to all women are worldwide. 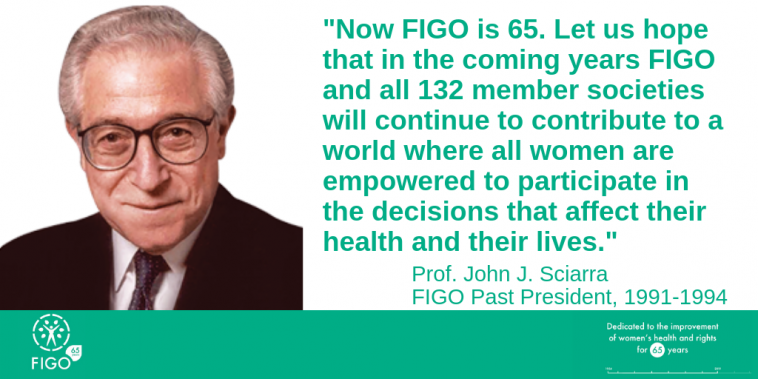 With the growth of FIGO and the growth of National Member Societies from 42 in 1954 to 132 today, FIGO initiatives have expanded to encompass all medical and social issues relating to global women’s health.

When I became president of FIGO in 1991 the overriding issue in our specialty worldwide was the shockingly high maternal mortality with over 600,000 women dying a year and over 95% of these maternal deaths were in low income countries with limited medical resources, especially in Latin America, Africa and Asia.

The Millennium Development Goals (MDGs) were set by the UN at the 2000 Millennium Summit, including a formal target (5) to call global attention to the issue and to accelerate global progress in reducing, by three quarters, between 1990 and 2015, the maternal mortality ratio.

FIGO’s Safe Motherhood initiative called further international attention to this health tragedy and focused resources to reduce maternal morbidity and mortality. Between 2006 and 2011 FIGO led projects in 10 countries, including leveraging a ‘twinning mechanism’ between high income countries and National Member Societies in the global south. Through this twinning mechanism, mentors from the high-income country were paired with the country Director/co-director from settings where maternal mortality rates were high. The purpose was to help strengthen and build capacities of FIGO member societies through allowing them the opportunity to learn from each other through sharing information and experiences to address the major causes of maternal mortality.

Fortunately, FIGO, along with other international organisations, and as set within the formal SDG3.1 target to reduce maternal morality to 70 per 100,000 live births by 2030, is continuing to address the necessary reduction in preventable maternal mortality in low resource settings.

Our work also continues to address complications in pregnancy and childbirth, including postpartum haemorrhage, pre-eclampsia and eclampsia, and unsafe abortion which are the leading cause of death for adolescent girls in low-income countries, where 99 percent of maternal deaths occur.

In recent years the FIGO focus has expanded to encompass all medical and social aspects of women’s health, a change in keeping with the problems faced by women everywhere. This is an important addition to the FIGO mission for the 21st century and one in keeping with all contemporary women’s health issues including access to all quality reproductive health care. FIGO and our National Member Societies on every continent have become strong advocates for women’s health and this is without question the most important direction for the future.

Now FIGO is 65. Let us hope that in the coming years FIGO and all 132 member societies will be able to contribute to a world where quality reproductive health care is available to all women worldwide, and a world where all women are empowered to participate in the decisions that affect their health and their lives.

To FIGO at 65, may the next 65 years be as productive and as noteworthy as the first 65 have been.