Following reports of the purported and unprecedented leak of the draft Supreme Court of the United States (SCOTUS) opinion to overturn Roe vs Wade, FIGO President Dr Jeanne Conry speaks out against the potentially catastrophic impact of the decision. 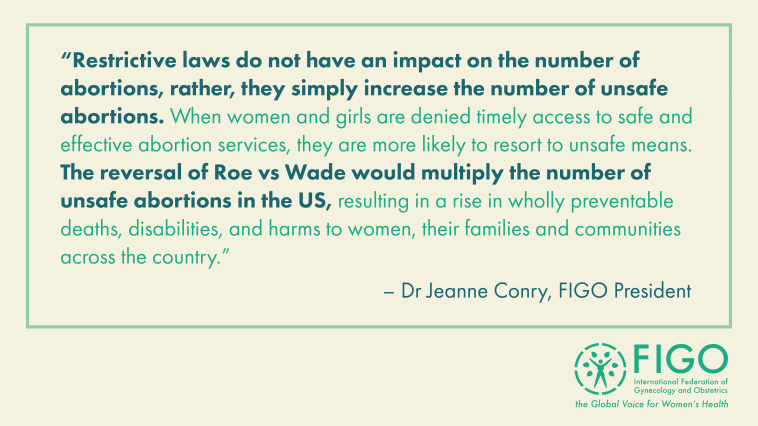 The landmark 1973 Roe vs Wade ruling has since allowed women in the USA to seek an abortion without excessive government restrictions. Recent news indicates that SCOTUS is likely to overturn the ruling. The final decision on this ruling is due in June 2022.

If made official, such a decision would have a catastrophic impact on a national and global scale, threatening the lives of women and girls every year.

Restrictive laws do not have an impact on the number of abortions, rather, they simply increase the number of unsafe abortions. When women and girls are denied timely access to safe and effective abortion services, they are more likely to resort to unsafe means.

The reversal of Roe vs Wade would multiply the number of unsafe abortions in the US, resulting in a rise in wholly preventable deaths, disabilities, and harms to women, their families, and communities across the country.

Access to safe abortion is a basic and non-negotiable human right. Abortion is a time sensitive, essential medical service that should be provided in accordance with women and girls’ preferences, and with safety, privacy and dignity at the forefront. It is an integral part of gender equality, reproductive justice and universal access to health care.

FIGO continues to call for the total decriminalisation of safe abortion, on behalf of both women and their health care providers. Abortion care must be treated like any other essential health issue in medicine, for which the standard of care is based on best practice guidelines, training and delivery.