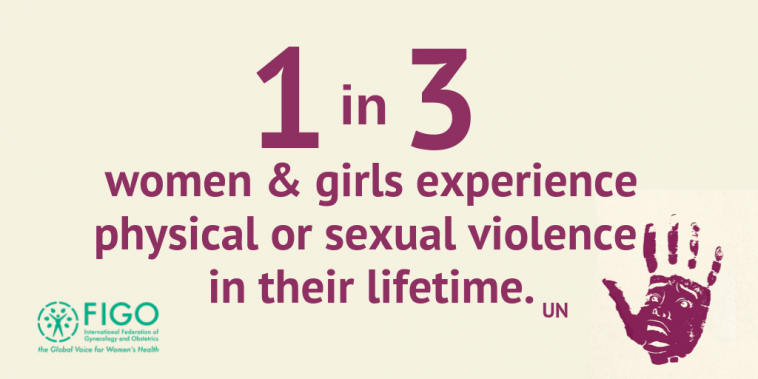 Ahead of the G7 Leaders’ Summit in France last month, the G7 Gender Equality Advisory Council delivered 79 recommendations for improving legislation on violence against women, economic empowerment, education and health, and discrimination.

The Council calls on G7 leaders and other countries to commit to the “Biarritz Partnership”, and use their recommendations to implement progressive legal frameworks for gender equality.

As we addressed at FIGO World Congress in Rio de Janeiro in 2018, just over a third of women worldwide have experienced either intimate partner violence or non-partner sexual violence in their lifetime.

During FIGO2018, we marched together to highlight the vital role that obstetricians and gynecologists can and do play in ending violence against women, as care providers, educators, experts, and activists. Many of the recommendations in the Gender Equality Advisory Council report – in particular around education and training, specialist care, and access to support services - echo FIGO’s 2018 Global Declaration on Violence Against Women.

The role of health professionals is also recognised in the Beijing Platform for Action which calls for funded training programmes for medical and social workers, as well as recognition and support for family planning centres and health clinics.

The G7 Gender Equality Advisory Council report includes example laws from different countries all over the world which illustrate the 79 legal recommendations.

For example, Brazil’s Maria da Penha Law which came into force in 2006 is highlighted as a leading example of legislation on intimate partner and domestic violence.

The law recognises all forms of violence (physical, emotional, sexual, and economic), provides for criminal sanctions, and extends protection for survivors, whether they are married or not.

Consent is identified in the report as a key concept for ending sexual violence and tackling the gendered social norms which underpin it.

In Canada, a voluntary agreement to engage in sexual activity is required to constitute consent in law, and a woman’s sexual history or medical records are banned from being used as evidence to assess the likelihood that she consented to sex.

This legal approach has resulted in a higher conviction rate for sexual violence than in most other countries; of the sexual assaults reported to the police from 2009 to 2014 in Canada, 45% resulted in a guilty verdict.

In 2018 Sweden moved from a ‘No means No’ legal model of consent towards ‘Yes means Yes’, with a new law which says that a person must give clear, ongoing verbal or physical consent. Under the majority of current laws globally, the survivor carries the burden of proof to show that force was used or that they were in a vulnerable situation. The affirmative model of consent recognizes all sex without consent as rape.

Over the years, International agreements like the Beijing Platform for Action have applied pressure and brought progress towards ending all forms of violence against women and girls, but there is still a long way to go.

The G7 Gender Equality Advisory Council report is a welcome addition to this body of knowledge about what works to end violence against women and girls.