Violence against women and girls is a major public health problem, affecting an estimated one in three globally. 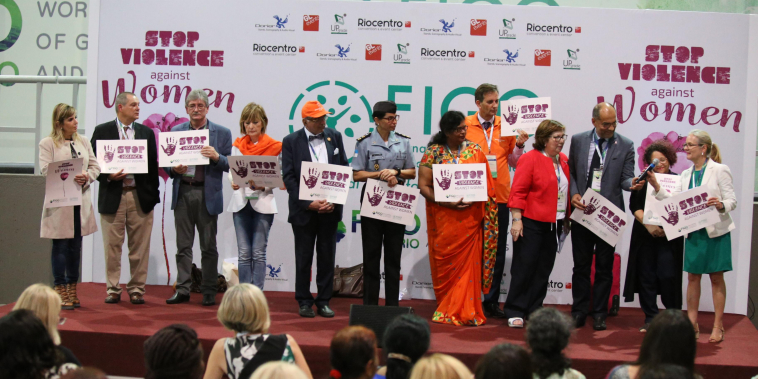 No country is immune to the pandemic, which has a serious impact on the physical, mental, sexual and reproductive health of women. As the global voice of women’s health, FIGO is alarmed by the continuing high prevalence of violence against women (VAW) worldwide, deeply concerned about the consequences, and committed to taking action.

In October 2018, at the FIGO World Congress, clinicians, activists and advocates from around the world launched the Global Declaration on Violence Against Women to highlight this major issue. Hundreds moved alongside each other and raised their voices in the ‘Stop Violence Against Women’ march through Rio, Brazil.

“It is beyond any doubt that violence against women is the new global silent epidemic affecting the physical, mental, and social health of women in every walk of life, women at any corner of the planet.”

“This epidemic comes as a beast with many masks: structural violence, sexual violence, gender-based violence, political violence to name just a few. Women with fewer resources or opportunities can be at higher risk, as are women displaced by wars and conflicts. 50% of the world’s refugees are women and girls, and at least 1 in 5 are estimated to have experienced sexual violence.”

The Declaration calls for developing the capacity of all health care providers with adequate support from their health systems, and the provision of specialised care to meet the health needs of women who suffer violence, and makes recommendations to reduce the levels of violence.

“Today we are saying out loud: No! to VAW.” Today we are informing survivors of VAW and their families and beloved ones that we care, FIGO cares, and our efforts will intensify to make VAW a global urgent agenda at all levels.”