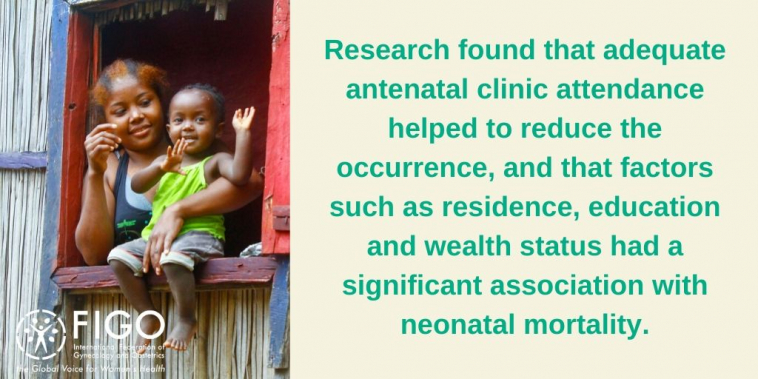 The postnatal period is a critical phase in the lives of mothers and newborns. Most maternal and infant deaths occur during this time. Yet, this is the most neglected period for the provision of quality care.

Of the 2.5 million infant deaths that occur within the first month of a child’s life, the vast majority take place in low- and lower-middle income countries. Despite overall death rates going down, levels of maternal death are nearly 50 times higher for women in sub-Saharan Africa and their babies are 10 times more likely to die in their first month of life, compared to high-income countries.

Data from Ethiopia suggests that the odds of neonatal mortality were significantly associated with pre-term birth and mothers with no antenatal care visits during their pregnancy. Research conducted on a dataset from Nigeria also found that adequate antenatal clinic attendance helped to reduce the occurrence, and that factors such as residence, education and wealth status had a significant association with neonatal mortality.

Many women face barriers to accessing the necessary care, resulting in these high rates of mortality. In rural communities there are a lack of healthcare providers, and the closest professional or hospital may be too far for many women to make the journey.

Additionally, if women have not received education on pregnancy they may be unaware that they are pregnant. If the pregnancy was unexpected or was as a result of trauma, some may be embarrassed to turn up to a clinic at all.

A review of neonatal mortality data in Sub-Saharan African countries indicated that having at least one antenatal care visit by a skilled provider during the pregnancy reduces the risk of newborn mortality by 39%. The WHO recommends that a minimum of eight antenatal care contacts are required to reduce perinatal mortality. In Mozambique, one of our Member Society highlights that many women are having their antenatal visits with nurses rather than doctors.

Research repeatedly demonstrates that the poorest areas have the highest rates of newborn death. Women may not be able to access the funds to make a journey to a facility, having to then suffer alone. Household funds specifically are also linked to factors associated with survival rates, such as health behaviour and exposure to injury and illness.

This is not only an issue of a high rate of disease or illness, but it reflects a wider socioeconomical issue, where poverty both directly and indirectly affects newborn survival. It highlights stark inequalities between those with a higher wealth status and those without, as well as the disadvantages many women face if they live in an area where access to healthcare is difficult.

The greatest risks to still occur in the first month of life due to prematurity, intrapartum-related events such as birth asphyxia and birth trauma, and neonatal sepsis which accounts for almost three quarters of neonatal deaths. If we are to reach the SDG3.2 target to reduce neonatal mortality to at least as low as 12 per 1,000 live births, we still have a lot of work to do.