If a pregnant woman is living with HIV, without treatment the likelihood of the virus passing to her infant is 15 to 45 percent. 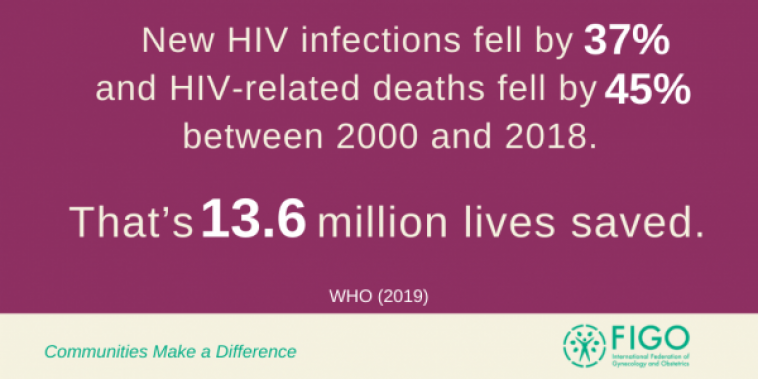 Today, five million young people around the world are living with HIV. Many of these adolescents have been living with their HIV-positive status since birth, as mother-to-child transmission during pregnancy, birth, or breastfeeding has accounted for the vast majority of infections in children up to 14 years old.

In recent years the development of antiretroviral therapy (ART), which can control the virus and help prevent onward transmission to others – including newborns - has made a dramatic impact on new infection rates; reducing the risk to less than 5 percent.

Thanks to coordinated international efforts to roll out ART, new HIV infections fell by 37 percent and HIV-related deaths fell by 45 percent between 2000 and 2018, with 13.6 million lives saved. Between 2010 and 2018 around 1.4 million HIV infections among children were avoided through programmes using ART to prevent mother-to-child transmission. In 2017, just over half of the 1.8 million children living with HIV were receiving ART.

Despite this progress, in 2016 alone around 200 000 adolescents between the ages of 15 and 19 years became HIV positive, most of whom were young women in sub-Saharan Africa. Widespread gender inequality makes teenage girls more vulnerable to HIV as they are less likely to know about and be able to negotiate for safe sex, and may be subject to sexual violence or exploitation, as well as harmful traditional practices such as early and child marriage.

The development and distribution of ART has put an end to HIV and AIDS within reach. However, social change is needed to halt the spread of the virus once and for all. A recent study published in the Lancet showed that despite variations in absolute levels of HIV incidence in adolescent girls and young women in different regions, across all settings women were still more at risk than men, with the largest gender gap in the youngest age groups.

UNAIDS Start Free Stay Free AIDS Free campaign aims to reduce the number of new HIV infections among adolescents and young women to less than 100 000 by 2020, in line with Sustainable Development Goal target 3.3 to end the AIDS epidemic by 2030. To achieve these goals, young people everywhere need access to affordable and youth-friendly sexual health, family planning, and HIV testing and treatment.

The theme for this year’s World AIDS Day is ‘Communities Make a Difference’. FIGO has been working with partners and our National Member Societies towards this aim, and calling for global action to end violence against women and girls.

As a global community we have an incredible opportunity to eliminate HIV and AIDS.