Violence Against Women (VAW) is a global issue, a public health issue and a human rights issue that violates autonomy and hinders development. 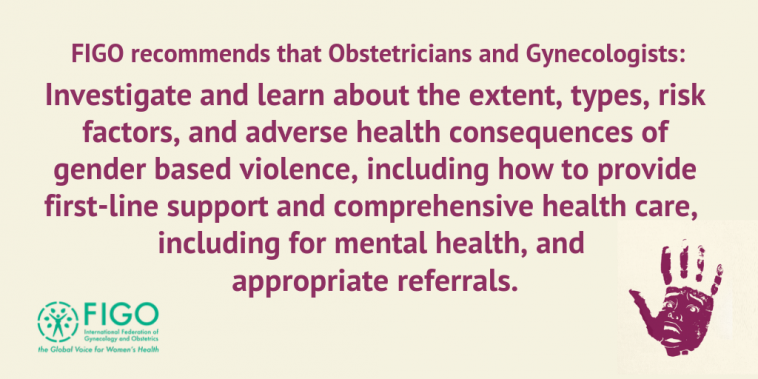 It is wholly incompatible with FIGO’s vision of a world where women achieve the highest possible standards of physical, mental, reproductive and sexual health throughout their lives.

Consequences of VAW include death by homicide or suicide, bodily injury and chronic pain, depression and post-traumatic stress disorder, sexual dysfunctions, unintended pregnancy, miscarriage or premature delivery. Assuring women’s rights through legal frameworks is a first step in addressing the discrimination that can lead to such trauma.

This is why we, as part of FIGO’s Committee for Women’s Health and Human Rights, have taken on the campaign. We are here to say ‘No’ to violence against women, and we remember and repeat the pledge in support of the Universal Declaration of Human Rights:

‘When anyone’s human rights are denied, everyone's rights are undermined.’

Violence against women does not take only one form. It can be physical, sexual or psychological harm; it is also coercion or arbitrary deprivation of liberty. It includes threats of such action, and it does not matter if it occurs in public or private life: it is gender-based violence (GBV) and it must be eliminated, as set out in the Sustainable Development Goals (SDGs) 5.2.

Our Committee helps FIGO Member National Societies engage in rights-based advocacy. Our goal is to support OBGYNs in pushing governments to take steps in achieving those rights, through FIGO’s Global Declaration on the Elimination of Violence Against Women, and our solidarity march. But it is critical that education and advocacy reach beyond the clinical profession. Our Committee’s WELL! campaign aims to raise awareness of VAW and what steps we can implement together to address it across all contexts.

In forty-nine countries there are no laws specifically protecting women from domestic violence, but almost one third of women globally report that they have experienced some form of physical and /or sexual violence by their intimate partner.

Exposure to domestic violence in childhood can be part of a vicious cycle in abuse. Advocacy and empowerment interventions can make a difference. With the 70th anniversary of the United Nations General Assembly adoption of the Universal Declaration of Human Rights, we must call attention to the reality of women’s situations, and work together to protect the rights of women and girls.