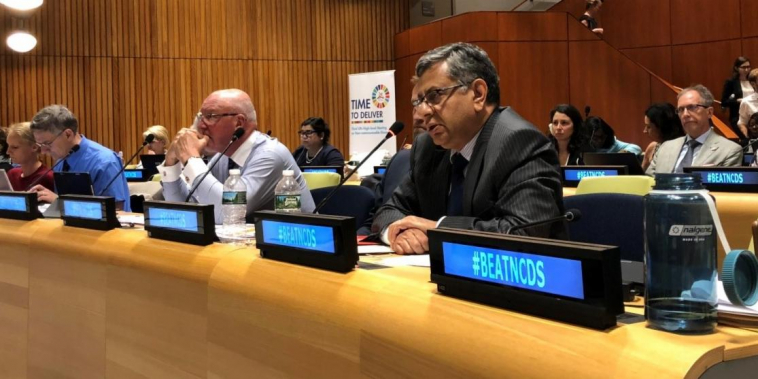 Pictured: Anil Kapur making the intervention on behalf of FIGO

The impact of these conditions on increasing pregnancy loss is also expected to be high but difficult to estimate. Not only do these conditions increase the risk of adverse pregnancy outcomes and increase perinatal morbidity and mortality, but they also identify both the mother and the offspring at being at very high risk of future diabetes, obesity, hypertension, cardiovascular disease and strokes.

Non-communicable diseases are high on the global development and health agenda and a third High Level meeting of the UN General Assembly on Prevention and Control of NCDs is scheduled to take place in September this year.

The President of the United Nations General Assembly therefore convened an interactive Civil Society hearing on the prevention and control of NCDs on 5th July, at the UN headquarters in New York before the September UN High Level General Assembly meeting on NCDs, stating:

“First, I want to talk about the scale of this challenge. It is massive. NCDs – including cancer, heart disease, stroke and diabetes – have become our biggest health threat. For the first time in history, they are killing more people than infectious diseases. In fact, NCDs are now responsible for two thirds of all global deaths. And, 15 million people with NCDs die per year before they reach 70. But we need to be clear on something: this is not a phenomenon we must accept”.

FIGO participated in the meeting and was represented by Dr. Anil Kapur, member of the FIGO Pregnancy and NCD Committee. Among others, the meeting was addressed by H.E. Mr. Miroslav Lajčák, President of the General Assembly, Dr. Svetlana Axelrod, Assistant Director General for NCDs and Mental Health, WHO; Dr. Sania Nishtar, Co-chair, WHO Independent High-level Commission on NCDs, Mr James Chau, WHO Goodwill Ambassador for SDGs and Health, H.E Mr. Sebastiano Cardi Permanent Representative of Italy and H.E. Mr. Elbio Rosselli Permanent Representative of Uruguay, the two co-facilitator of the of UN High level meeting to be held in September 2018. The meeting was structured as four moderated Panels with key speakers and interventions from the floor.

Most speakers noted the massive burden of NCDs and characterised them as the biggest threat to human health, national and global economies with an immense potential to drive poverty. Also noting that since the 2011 political declaration and 2014 target setting meeting progress on implementation has been slow and at current pace unlikely to meet the set targets. The overall focus was to push for universal health coverage and to scale up prevention and control of NCDs.

The links between maternal health and NCDs received scant attention from keynote speakers and the panelist except for a brief reference from Dr. Sania Nishtar, who noted the contribution of epigenetic changes and development programming to the rising burden of NCDs.

Two interventions from the floor from FIGO and Women Deliver addressed the issue both pointing to the links between maternal health and NCDs and the need to address the issue comprehensively.

FIGO comments on link between maternal health and NCDs

FIGO made the following statement:

This approach was supported and endorsed by the representative of Women Deliver who called attention specifically to hyperglycemia in pregnancy and its consequences and drew attention to a call to action from Women Deliver to address the issue.