Uniting to eliminate violence against women 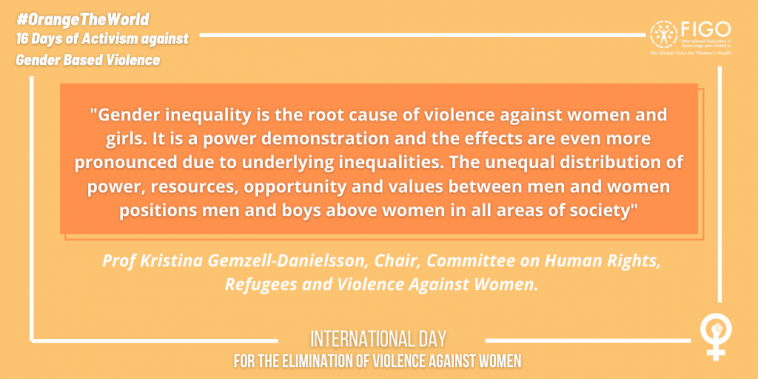 Today – International Day for the Elimination of Violence Against Women – marks the start of the UN Secretary-General’s 2020 UNiTE to End Violence against Women campaign. This multi-year effort aims to prevent and eliminate violence against women and girls and will focus on the issue of rape as a specific form of harm committed against women and girls in times of peace or war.

In support of the campaign, FIGO's Committee on Human Rights, Refugees and Violence Against Women calls for renewed commitment to creating awareness of gender-based violence (GBV), with particular focus on gender equality and prevention of rape. Gender inequality is the root cause of violence against women and girls. It is time to work on changing social norms which bring forth women as equal partners to men.

Just over a year ago, FIGO released a statement at the Nairobi summit on ICPD25 Gender-based violence (GBV), where we committed to addressing GBV, child marriage and female gential mutilation (FGM). What progress has been made since those discussions?

FIGO has prioritised GBV as a top agenda since the last FIGO World Congress, and at the Nairobi summit on ICPD25 GBV. We have also used opportunities with our national member societies to talk about GBV and to create a voice for raising awareness about GBV. We have emphasised the role that obstetricians and gynaecologists can play, and our obligations in detecting GBV and streamlining the issue, and to look at the processes existing in various countries (see publications from the committee).

Has COVID-19 impacted any plans to address these topics?

COVID-19 has had a significant impact on efforts, as time and opportunities – and in many places, funds – have been redirected to the COVID-19 response. There is a wide range of responses to the challenges and we addressed these in a recent webinar on sexual and reproductive health and rights (SRHR) and the impact of COVID-19.

The UN's two-year long UNiTE to end VAW campaign begins this month, which focuses on the issue of rape as a specific form of harm committed against women and girls in times of peace or war. How does the committee plan to stand in solidarity with this campaign and will you prioritise working on this area over other issues?

Our committee and subcommittees on Human Rights, Refugees and Violence Against Women are committed to ending violence against women.

Although the campaign and our committee members face increasingly challenging conditions – with growing numbers of COVID-19 cases, increasing numbers of patients and struggles with keeping up SRHR services – we are supporting the UNiTE campaign until the end of 2020, with particular focus on the subject of rape.

We are writing to all national member societies to ask them to raise their voice against rape in the form of walks, webinars, workshops and sending messages for prevention and management. We are supporting them to highlight the role of social norms and gender in tackling the issue.

In your opinion, what is the root cause (or causes) of instances of rape in peace/war? What factors increase/decrease the rates of this act of violence?

Gender inequality is the root cause of violence against women and girls. It is a power demonstration and the effects are even more pronounced due to underlying inequalities. The unequal distribution of power, resources, opportunity and values between men and women positions men and boys above women in all areas of society.

The factors working to create the underlying social context in which violence against women occurs include:

Additionally, poverty, political instability, wars, pandemics and natural disasters all increase the vulnerability of women, thus making them susceptible to adverse events such as rape and other forms of GBV.

Gender equality, positive messages and efforts to change social behaviors (a challenging task by all standards) can help to reduce GBV. Bringing in laws to protect vulnerable populations, implementing those laws and ensuring a quick response by law-enforcing agencies and justice departments can too bring about deterrence and a reduction in incidence.

In your country of residence, is your government doing anything to actively reduce GBV? If so, what are they doing and what are your views on their efforts?

FIGO, in partnership with national member societies, is planning workshops and initiatives in several countries. One example is broad political and social engagement work in Pakistan to reduce the incidence of GBV and to create a supportive environment to facilitate the after care. This is actively supported by the Society of Obstetricians and Gynaecologists of Pakistan and developmental partners.

The government of Pakistan is under a lot of pressure by the communities at large and the media to actively work on the issue of GBV. In this regard, work is being done on the reproductive and health care rights bill, and the Sindh Assembly in November 2019, unanimously passed ‘The Sindh Reproductive Healthcare Rights Bill 2019’ to promote the reproductive healthcare rights of women and men, as well as to redress the complications related to pregnancy and childbirth. The bill has a significant component of GBV.

Similar work is being carried out in other provinces. The government is also working on the management of GBV survivors for developing an integrated management system of care. For this purpose, meetings, seminars and workshops are being held for healthcare practitioners, law makers, justice department, police and social workers.

The issue of child marriage is also being talked about in Pakistan. To address the issue, high-level discussions are being held to raise the age of marriage in one of the largest provinces in the country.

In additional to political discussions, a lot of work is being carried out in communities to provide information, education and communication materials and support.

Since the onset of the pandemic, a help line has been set up for GBV, emotional and physical abuse and family conflicts with support. Women-Friendly Health Spaces for Afghan refugees’ settlements in Balochistan, KP and Sindh remain functional and continue to support areas affected by COVID-19 through case management, referral, and basic GBV and SRH services. Additional facilities in KPK, have been providing Psycho-social support, RH and GBV services.

An awareness campaign featuring messages from ObGyns, politicians and leaders was broadcast through FM101 radio channel throughout the months of April and May in regional languages. In addition, a social media campaign has been launched to reach around 225,000 young people (aged 13–29 years) to raise awareness of their Sexual Reproductive Health & Rights (SRHR) during COVID-19.

All of these efforts are making an impact, but need more uniformity and cohesion. Long-term interventions and efforts are required to ensure continuous engagement with communities and sensitisation of politicians and policy makers to help keep up the efforts.