The Associação Moçambicana de Obstetras e Ginecologistas (AMOG) recently worked with musicians in Mozambique to release a song on sexual and reproductive health and rights (SRHR), with a focus on access to safe abortion. As part of an awareness-raising campaign, AMOG organised an event for adolescents at Josina Machel Secondary School with musicians Yolanda Kakana from Banda Kakana, and Sistah Áfrika. 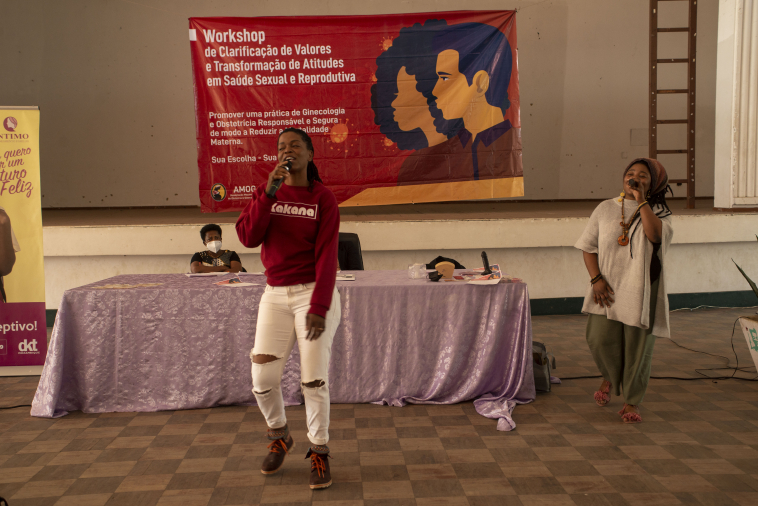 Using music to raise awareness of the right to safe abortion

Art, in general, and music, in particular, can – and should – contribute to the fight against maternal and child mortality. Yolanda Kakana and Sistah Áfrika wrote the song “Dura Realidade” (Hard Reality), which tells the story of a girl who intends to end an unwanted pregnancy, to raise awareness of this issue in Mozambique.

On 28 June 28 2021, AMOG organised an event with the support of FIGO’s Advocating for Safe Abortion Project for them to premiere the song in one of the biggest secondary schools in Maputo, the Josina Machel Secondary School. The event aimed to transform attitudes regarding SRHR by ensuring young people in the school received accurate information, including on safe abortion and family planning. 100 students attended the event, as well as the school's board management, a dozen teachers, representatives of the Ministry of Education, and OBGYN members of AMOG.

Yolanda highlighted that given the daily situations that women and girls still face when it comes to accessing safe abortion services, she felt that “to remain silent would mean being an accomplice”. She went on to say:

I join the artistic movement that promotes women's rights, hoping this song raises an urgent reflection to challenge patriarchal ideologies. I also expect that promoting the song in the next year will contribute to a necessary debate and lead to transformations around women's health and rights.

Following the musical performance, OBGYNs from AMOG answered questions from students, which revealed a severe lack of understanding among the adolescents about SRHR.

Dr Emília Selemane and Dr Zara Manhique answered questions on the consequences of unsafe abortion, the legality of abortion, the legal framework for abortion and the levels of decision-making in health facilities when someone seeks abortion services. Both physicians highlighted that abortions should not be performed outside of hospitals and clarified that unsafe abortion has serious and often deadly consequences, such as haemorrhage, internal injuries and anaemia, among others.

After the event, students discussed how much they had learned during the event.

I didn't know anything about safe and unsafe abortion, but because I've never been in the situation that forced me to follow that path. I also didn't know that [safe abortion] was legal and that it is no longer punishable by law. It was a learning moment and it was worth being at the lecture.

The lecture was good; we were able to get more information from the doctors who were talking to us and clarifying our doubts. I did not know that abortions can be performed in all hospitals and that it is free – this information is new to me. I was also surprised to learn that from the age of 16 I can have an abortion as long as I go to the hospital. In this lecture, I could also have more information about clandestine abortion, something that we must avoid in order not to risk our lives.

Though the session was a success, the artists will continue to organise lectures in communities so that information about abortion laws can be shared, thus contributing to the reduction of unsafe abortion and maternal and child mortality. According to Sistah Áfrika, fighting the stigma associated with abortion in communities is at the centre of this work.

I know girls who suffered discrimination because of abortion. Hence, it is necessary for society to know the law and that women are free to decide what is best for them. It's important that older people know about all this too, not just adolescents.

Sistah Áfrika explained that due to her experiences witnessing the dangers of unsafe abortion growing up, she decided to embrace activism as she believes “it is one of the approaches that can help in the fight against unsafe abortion.”

I decided to embrace this cause because I thought it was pertinent. Girls lose their lives through unsafe abortion. So, I thought it was good to be part of this campaign to really help raise girls' awareness.

Yolanda Kakana highlighted that for such activism to truly be successful, “change needs to happen at different levels, such as increasing commitment in resources, educating parents and girls so they can become peer educators, ensuring the application of the law, increasing community engagement, and delivering family planning methods.”

As a final thought, Yolanda Kakana shared that she thought the role of the song would be to “lift the veil” on prejudiced attitudes that diminish women and girls’ bodily autonomy. In sparking conversations on the issue of safe abortion, she hopes that their activism will contribute to a genuine national commitment to respect the choices made by women and girls about their lives and futures.