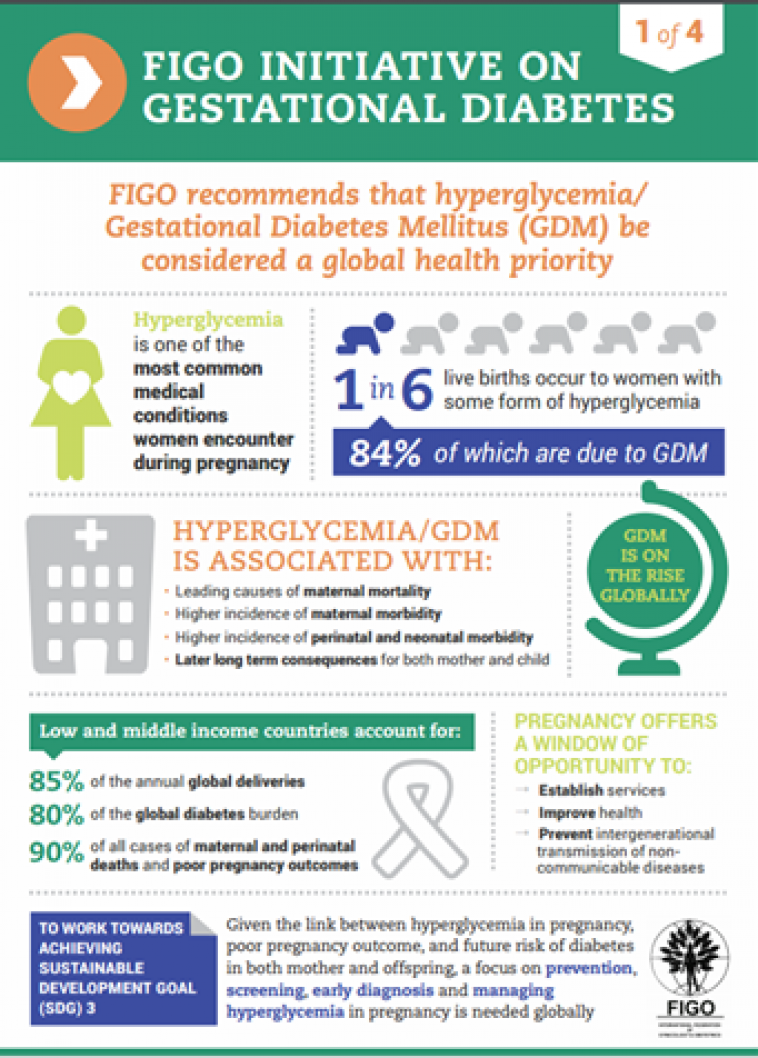 The topic for World Health Day 2016 is ‘Beat diabetes’. In 1948, the First World Health Assembly called for the creation of a ‘World Health Day’ to mark the founding of the World Health Organization (WHO). Since 1950, it has been celebrated on 7 April each year, with a different annual theme that highlights a priority area of concern. It is an important global opportunity to highlight major public health issues, and it can act as a springboard for longer-term advocacy programmes.

FIGO - a global organisation bringing together gynecological and obstetrical societies from 130 countries/territories - has as its vision women of the world achieving the highest possible standards of physical, mental, reproductive and sexual health and wellbeing throughout their lives.

FIGO recognises that women at reproductive age with diabetes or pre-diabetes are at risk of having their pregnancy complicated by hyperglycaemia. As comprehensive information on this important issue has previously not been available to healthcare professionals, FIGO recently produced a resource setting out evidence-based guidance on screening, diagnosing and providing care for women with gestational diabetes mellitus (GDM).

In the long-term, non-communicable diseases (NCDs), such as diabetes, become burdensome, costly and debilitating, negatively impacting productivity and family income. Evidence shows that prenatal and early life development influence the risk of NCDs in later life.

FIGO is therefore committed to working towards the new Sustainable Development Goal SDG 3.4: ‘By 2030, reduce by one third premature mortality from noncommunicable diseases through prevention and treatment and promote mental health and well-being’, and pursuing its mission in very concrete ways, through advocacy, programmatic activities, capacity strengthening of Member Societies, education and training.

The International Federation of Gynecology and Obstetrics (FIGO) Initiative on Gestational Diabetes Mellitus: A Pragmatic Guide for Diagnosis, Management, and Care

FIGO Initiative on Gestational Diabetes Infographics can be found on this page: http://figo.org/figo-project-publications

More information on World Health Day 2016 can be found here.