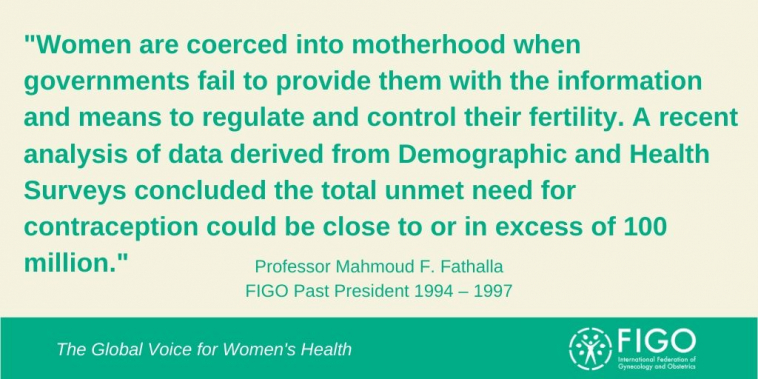 The Cairo International Conference on Population and Development (ICPD) has adopted a ground-breaking Programme of Action to advance women’s reproductive rights.

The great revelation at the Conference was that when we speak about population we are speaking about people, not just numbers. In Cairo they made their voices heard and the world had to listen.

"Advancing gender equality and equity and the empowerment of women, and the elimination of all kinds of violence against women, and ensuring women's ability to control their own fertility, are cornerstones of population and development-related programmes.” ICPD Programme of Action

Motherhood should be a dignified, informed, responsible choice. It is only recently that the world is realising the heavy price it is paying for not empowering women to make decisions in their lives, including reproductive decisions.

Women are coerced into motherhood when governments fail to provide them with the information and means to regulate and control their fertility. A recent analysis of data derived from Demographic and Health Surveys concluded the total unmet need for contraception could be close to or in excess of 100 million.

It should be a responsibility of the whole international community to ensure that women, wherever they are, are given a choice in their lives and are given the means to implement their choice.

The extent of the physical hazards of unwanted pregnancies depends largely on two factors:

Although maternal deaths have become rare events in high resource settings, they are a major cause of death for women of childbearing age in low income countries.

"All governments and relevant intergovernmental and non-governmental organisations are urged to strengthen their commitment to women's health, to deal with the health impact of unsafe abortion as a major public health concern and to reduce the recourse to abortion through expanded and improved family planning services.” ICPD Programme of Action

Unsafe abortion is a testimony for the magnitude of the problem of coerced motherhood. Unsafe abortion is one of the great neglected problems of health care in developing countries and a serious concern to women during their reproductive lives.

If there was a freedom movement somewhere in the world in which several hundred people were killed each day, there would be a world uproar, and its people would get at least a sympathetic hearing.

When these people are women and are dying every day, in pursuit of their reproductive freedom, there are, among us, those who prefer to close their eyes and ears, rather than to face a tragedy that exists.

Information on unsafe abortions is difficult to document, due to the stigma and secrecy that is often enforced on women who need this procedure. Combining various estimates yields a total of 15 million unsafe abortions (WHO, 1990). However, since these figures cannot be fully relied upon, the actual number may be as low as ten million or as high as 22 million.

"All countries should, over the next several years, assess the extent of national unmet need for good-quality family-planning services and its integration in the reproductive health context… and should, in all cases by the year 2015, seek to provide universal access to a full range of safe and reliable family-planning methods and to related reproductive health services which are not against the law."  ICPD Programme of Action

The Cairo ICPD has strongly reaffirmed women's reproductive rights. As noted, however, in the Programme of Action, the significance of the Conference will depend on the willingness of governments, local communities, the non-governmental sector, the international community and all other concerned organisations and individuals to turn the recommendations of the Conference into action.

The Programme of Action calls on the United Nations General Assembly to organise a regular review of the implementation, and to consider the timing, format and organisational aspects of such a review.

A broad coalition of legal and health professions and women's organisations, under the banner of human rights, is needed to protect and promote women's reproductive rights, and to hold states accountable for their actions and inactions.