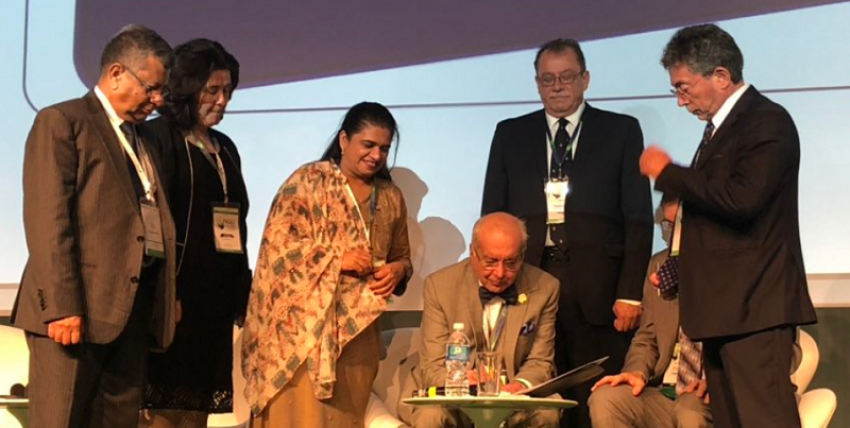 Today at FIGO World Congress in Rio de Janiero, the FIGO Pregnancy and NCD's Committee led the signing of the FIGO Global Declaration on Hyperglycemia in Pregnancy. This was the culmination of two years’ work bringing together representatives of governments, professional medical organizations, public health agencies, research institutions, affected communities, and civil society groups to recognize the need to focus on hyperglycemia in pregnancy - one of the most common medical conditions seen during pregnancy. Building momentum through regional declarations in South Asia, Europe, Latin America, and Middle East and North Africa, this global declaration sends a clear message to the world that urgent attention and action are needed.

With an estimated 1 in 6 live births occurring to women with some form of hyperglycemia in pregnancy, the list of complications it can result in are staggering, including: hypertension, still birth, premature delivery, large and small for gestational age babies, obstructed labor, postpartum hemorrhage, infections, birth injuries, congenital anomalies and newborn deaths due to respiratory problems and so on.

Signed on the first day of the Congress, one of the speakers highlighted how important this declaration is for Brazil, as a high priority country due to its high levels of obesity and diabetes, and how imperative it was to do more for women, not just during pregnancy, but before and after as well. By signing this pledge, delegates answer this call to do more and do it now!

Between 1990 and 2015, focused attention under the Millennium Development Goals (MDGs) resulted in improvement in maternal and newborn child health. The global maternal mortality ratio (MMR) declined 44% between 1990 and 2015; however, despite the launch of the Sustainable Development Goals (SDGs) in 2015 and continued attention, huge regional and income disparities in MMR persist ranging from 12 deaths per 100 000 live births in high-income regions to 546 in some parts of sub-Saharan Africa; and the overall annual death toll remains unacceptably high: 289,000 maternal deaths, 2.6 million stillbirths, 5.9 million deaths in children under the age of five — including 2.7 million newborn deaths.

Hemorrhage, hypertension, sepsis and obstructed labor directly account for a large number of maternal deaths; indirect causes -medical conditions which are exacerbated by pregnancy such as obesity, diabetes, cardiovascular disease, malaria, HIV etc., also contribute significantly and now account for over 28% of maternal deaths worldwide and to further reduce maternal mortality increased efforts to identify, prevent and treat these conditions is required.

Obesity and overweight is an escalating problem among women of reproductive age globally with wide regional variance, ranging from approximately 20% in South Asia to over 90% in North and Central America, Northern and Southern Africa and West Asia and an estimated 42 million pregnancies are impacted by maternal overweight or obesity which increases risk of hyperglycemia in pregnancy (HIP). In the low and low middle income countries maternal undernutrition, low birth weight and stunting particularly in girls continue to be significant problems and women born low birth weight or stunted have higher risk of gestational diabetes mellitus (GDM) despite normal or sub normal pre pregnancy weight.

Diabetes mellitus is a now a serious public health problem globally with rising prevalence among all age groups and according to the International Diabetes Federation affects an estimated 415 million people globally, projected to increase to 642 million by 2040; there is also an equally high burden of pre-diabetes - approximately 318 million people, likely to increase to 481 million by 2040.

The age of onset of prediabetes and diabetes is declining; thereby also affecting younger people in the reproductive age; at the same time the age of child bearing is increasing thus more women entering pregnancy have risk factors that make them vulnerable to HIP; additionally, both women born low birth weight, and women who are overweight and obese, are at increased risk of hyperglycemia in pregnancy. More than one third of people with diabetes and a majority of people with prediabetes remain undiagnosed and unaware; particularly the young and women, as they have never been tested given that diabetes is mistakenly believed to only affect the elderly.

Hyperglycemia is now one of the most common medical conditions seen during pregnancy. The International Diabetes Federation (IDF) estimates that 21 million live births - 1 in 6 (16.8%) occur to women with some form of HIP of which 2.5% may be due to overt diabetes in pregnancy. The other 14.3% (one in seven pregnancies) is due to GDM a condition which develops due to hormonal changes of pregnancy and is confined to the duration of pregnancy.

HIP significantly increases risk of pregnancy complications- hypertension, still births, premature delivery, both large and small for gestational age babies, obstructed labor, postpartum hemorrhage, infections, birth injuries, congenital anomalies and newborn deaths due to respiratory problems, hypoglycemia etc. Without preventive care, almost half of the women with GDM go on to develop type 2 diabetes and a significant proportion will develop premature cardiovascular disease within 10 years of childbirth. Children born to women with HIP are at very high risk themselves of later becoming obese and having early onset of type 2 diabetes; in this way HIP perpetuates diabetes risk into the next generation.

Addressing maternal nutrition, obesity and HIP helps lower maternal and newborn morbidity and mortality by lowering the risk of pregnancy complications such as preterm births, still births, congenital anomalies, and small and large babies, which are critical problems for maternal health. It is also an opportunity to break the chain of intergenerational transmission of risk for diabetes, cardiovascular diseases and metabolic problems.

While overweight, obesity and increasing maternal age indicate a higher risk for HIP, in practice, only half of the women with GDM have these risk factors, supporting the argument for testing all pregnant women for hyperglycemia. Most women diagnosed with GDM can be adequately managed by proper monitoring and practical nutrition and lifestyle counseling, but some may require medical treatment and referral to specialist care.

Providing preventive lifestyle care to women post GDM pregnancy, has been shown to reduce their risk for future diabetes and cardiovascular disease. Improving preconception counseling of young women of reproductive age and couples at the community level, including health evaluation and lifestyle counseling such as practical advice on weight management, nutrition and exercise, may further help reduce the burden of pregnancy complications and expensive interventions later on.

There is evidence for both immediate and long term; individual, health system and societal benefits (health and economic) of testing, diagnosis and management of GDM and for providing postpartum preventive care, as well as offering an opportunity to address two important components of Sustainable Development Goal 3 (maternal and newborn health and NCDs) with one comprehensive intervention.

the rising prevalence of high blood pressure, diabetes and gestational diabetes is increasing adverse outcomes in pregnancy and maternal health. Improving maternal health and nutrition plays an important role in reducing the future development of such diseases in offspring.

The Political Declaration of the High-level Meeting of the UN General Assembly on the Prevention and Control of Non-communicable Diseases held in New York on 19th September 2011 states with concern,

that maternal and child health is inextricably linked with non-communicable diseases and their risk factors, specifically such as prenatal malnutrition and low birth weight create a predisposition to obesity, high blood pressure, heart disease and diabetes later in life, and that pregnancy conditions, such as maternal obesity and gestational diabetes, are associated with similar risks in both the mother and her offspring" and advocates for "inclusion of non-communicable disease prevention and control within sexual and reproductive health and maternal and child health programs, especially at the primary health-care level, as well as other programs as appropriate, and also integrate interventions in these areas into non-communicable disease prevention programs.

In support of and as culmination of these global efforts,

That maternal and child health is inextricably linked with non-communicable diseases and their risk factors, specifically such as prenatal malnutrition and low birth weight create a predisposition to obesity, high blood pressure, heart disease and diabetes later in life, and that pregnancy conditions, such as maternal obesity and gestational diabetes, are associated with similar risks in both the mother and her offspring.

That pregnancy offers a unique opportunity to integrate maternal and child health services with health promotion and NCD prevention, thereby providing a bridge to create more integrated services at the primary care level.

That effort on NCD prevention and control must therefore begin with and substantially focus on preconception and maternal health.

That until and unless urgent action is taken to systematically address the issue of maternal nutrition, overweight and obesity and hyperglycemia in pregnancy, there is a high chance that the gains of the last decade in maternal and newborn health will be undone and the ongoing diabetes and obesity epidemic will worsen.

That we resolve to address this challenge and to convert it into an opportunity for improved health outcome for mothers and their newly born babies and stem the rising curve of NCDs and improve future population health.