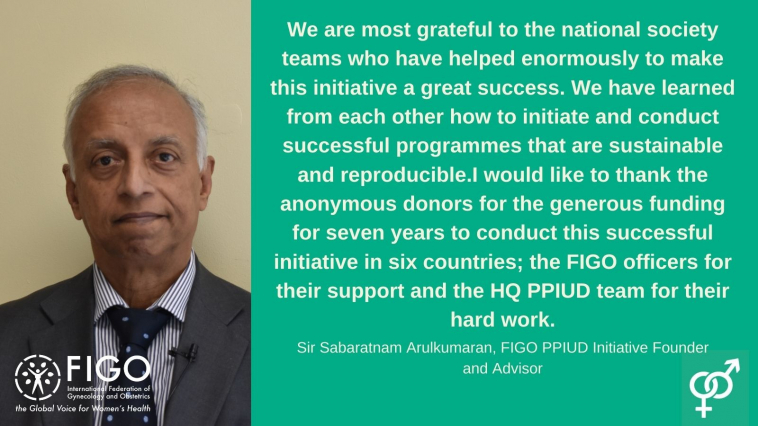 When the PPIUD Initiative was first conceptualised in 2013, the focus was on reducing maternal mortality, in accordance with Millenium Development Goal 5 (MDG 5). It was well established that a 30% reduction in maternal mortality can be achieved by offering contraception to women in the reproductive age group. We knew that nearly 2.2 million women did not have access to contraception, even if they wanted it, and we wanted to reduce the number of abortions for unintended pregnancies.

We recognised that in low- and middle-income countries (LMICs) there was little else offered to women postpartum other than permanent sterilisation. We wanted to support the societies in introducing long acting reversible contraceptives (LARCS) for mothers, so that they could have another child if and when then they wish, with spaced births. As well as reducing maternal mortality, birth spacing also reduces the likelihood of miscarriage, preterm births, intrauterine growth restriction and under-5 child mortality.

The FIGO members were taking care of pregnant mothers and their labour and we wanted to usefully engage them by asking them to offer postpartum family planning (PPFP) using LARCS in the form of the copper postpartum IUD (PPIUD), as well as other postpartum contraceptive options. As the project expanded, we also worked very successfully with midwives, nurses, dedicated counsellors and community health workers.

FIGO was able to work with the national societies with their full support to make PPIUD institutionalised across 48 institutions in six countries.

In Sri Lanka, the Sri Lankan College of Obstetricians and Gynaecologists (SLCOG) demonstrated the success of the PPIUD project to the government by showing that the expulsion rate was less than 3%. This encouraged the government to offer LARCS, including PPIUD, in all government institutions in the postpartum period as an official policy.

Task-sharing was promoted in Tanzania through collaboration with the Tanzanian Midwives Association (TAMA) to ensure that midwives, along with doctors, counsel women and provide insertions. In addition, they introduced PPIUD counselling and insertion in the pre-professional training in the medical, nursing and midwifery schools.

In Bangladesh, the Obstetrical and Gynecological Society of Bangladesh (OGSB) ensured that doctors from hospitals across the country were trained, in addition to the six original hospitals, and introduced trained counsellors to offer counselling in each of the hospitals. Now they are working with the government to make this as a permanent feature in all maternity units.

The Kenya Obstetrical and Gynaecological Society trained family health volunteers who work in the field to perform counselling for postpartum contraception, and also promoted task-sharing by training nurses and midwives as well as doctors to counsel and insert.

In Nepal, female community health volunteers were trained in counselling for greater outreach. Nepal Society of Obstetricians and Gynaecologists (NESOG) also worked closely with the government and implemented on-the-job training to sustain the initiative.

In India, the implementation strengthened the existing government policy to offer postpartum contraception by nursing and medical staff. Offering of PPIUD is built into the Government of India National Maanyata programme for maternity care.

The project was successful in all of the countries because of the dedicated hard work of the national teams and the staff from the headquarters at FIGO. The donors were supportive in allowing changes that we needed to adapt to situations, which helped the smooth navigation of the project. From the outset, the project worked closely with governments and partners from the private and the nongovernmental sector, which promoted sustainability and collaboration.

The project was quality controlled using the principles of structure, process and outcome audits. The national technical steering committee and data safety monitoring committee, with the involvement of the national societies and the government, helped to steer the project by having regular reviews mapped against set goals.

The FIGO PPIUD Initiative has paved the way for expanding PPFP choice for women, including PPIUD and beyond, such as implants, in a way that is sustainable and reproducible.

We believe that postpartum contraception should be a routine practice that is comprehensively discussed with women, starting when they come for antenatal care. The choice should be left to them, including the option for LARCS such as CuIUD, progestogen intrauterine systems, implants, or other methods, or none. PPFP should be adopted by all national societies, especially those from LMICs as more and more women are seeking maternity care in their local maternity institutions. This will help to reduce maternal mortality and the number of unintended pregnancies that may end up in abortion.

We are most grateful to the national society teams who have helped enormously to make this initiative a great success. We have learned from each other how to initiate and conduct successful programmes that are sustainable and reproducible.

I would like to thank the anonymous donors for the generous funding for seven years to conduct this successful initiative in six countries; the FIGO officers for their support and the HQ PPIUD team for their hard work.