The Sri Lankan Ministry of Health pledged to provide postpartum contraception with IUDs and implants across all hospitals in the country. 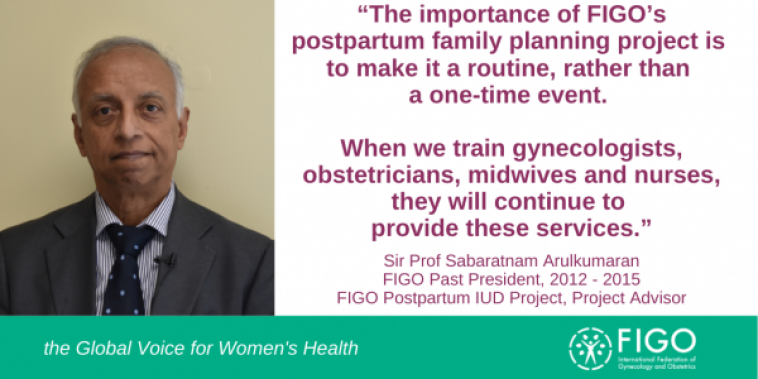 Following more than five years of close collaboration, consultation and work with local partners to pilot postpartum IUD services in 18 hospitals in Sri Lanka and influence the nations family planning policy, FIGO’s postpartum counselling and intrauterine device (IUD) insertion project closed in Sri Lanka one year ago: the end of one chapter in the country’s family planning history.

However, the story was not over. At a recent National Family Planning Day event in Colombo, organised by the Family Health Bureau and addressed by Sir Sabaratnam Arulkumaran, FIGO Past President and Postpartum IUD Project Advisor, the Sri Lankan Ministry of Health pledged to provide postpartum contraception with IUDs and implants across all hospitals in the country.

As 99 percent of births in Sri Lanka are now thought to occur in hospitals, this pledge not only ensures the longevity of FIGO’s project, but also its contribution to addressing the country’s unmet need for modern contraceptives.

The focus of the National Family Planning Day event was “Healthy kids – happy families,” highlighting the importance of family planning for maternal and child health. It brought together major stakeholders including lead project partner and FIGO National Member Society the Sri Lankan College of Obstetricians and Gynaecologists (SLCOG), the Family Planning Association of Sri Lanka (FPASL), UNFPA and the WHO.

FIGO received a special thank you from the Ministry of Health for our work expanding the scope of postpartum contraceptive prevalence in Sri Lanka.

Sri Lanka was the first country to be involved in FIGO’s postpartum family planning project, and the importance of strong local partnerships in its development and successful adoption by the government cannot be understated.

The Family Health Bureau was involved from the outset in planning, design and implementation. SLCOG was a committed and experience partner, with a key role to play in the capacity building of healthcare providers; a survey to its members received almost unanimous support for the project and role as trainers.

SLCOG’s strong recommendation to the government encouraged the Ministry of Health to issue a circular on strengthening postpartum family planning as a vital component of maternal and child health services in 2017.

Postpartum IUDs had been used in Sri Lanka as a contraceptive method starting in 1969, but by the mid-1970s the use had waned; its safety and efficacy as a family planning method needed evaluation before being accepted into national policy.

FIGO’s project team collected and reviewed data to inform implementation, which ultimately led to the project’s expansion into the five other countries. Independent monitoring and evaluation was provided by the Harvard T. H. Chan School of Public Health’s Department of Global Health and Population, in association with SLCOG.

Together, they hosted a National Dissemination Meeting the same week in Colombo, presenting results from their evaluation of FIGO’s implementation of the project to institutionalise immediate postpartum IUD services as a routine part of antenatal and delivery room care.

Sir Arulkumaran also spoke at this event, giving an overview of the project and its long-term aims:

"The importance of FIGO’s postpartum family planning project is to make it a routine, rather than a one-time event. When we train gynecologists, obstetricians, midwives and nurses, they will continue to provide these services.

By giving women more choice to space their family, by allowing a gap of at least two years between children, we can reduce the abortion rates, pre-term birth rates, intrauterine growth restrictions - there are so many health benefits, as well as the economic advantages when she is able to work."

The results, based on nine and 18-month interviews with both clients and providers and compared with a control group, clearly showed that the implementation had been a success: increased knowledge of postpartum contraception, client satisfaction, and greater awareness of the choice offered by long-acting reversible contraceptives (LARCs) rather than a permanent method.

A long-term improvement in maternal and child health

Ultimately, our FIGO project has helped to enhance birth spacing in Sri Lanka, through increasing the availability of post-partum contraception, as well as increasing access to counselling and choice.

This is a significant contribution towards improving maternal health – in Sri Lanka and beyond, as Sir Arulkumaran explained:

“In many of the countries in which we have worked, Postpartum IUD services became a national programme. We think it will continue – not only in the pilot hospitals, but also in many others. I’m sure that globally this will be an important advance in reducing maternal mortality.”

To learn more about FIGO’s postpartum IUD initiative, and our commitment to initiatives which address the unmet need for family planning, visit www.figo.org/ppiud-project 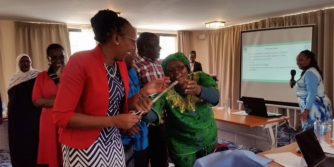 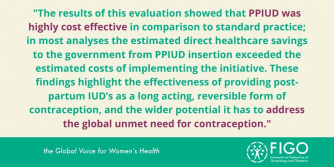