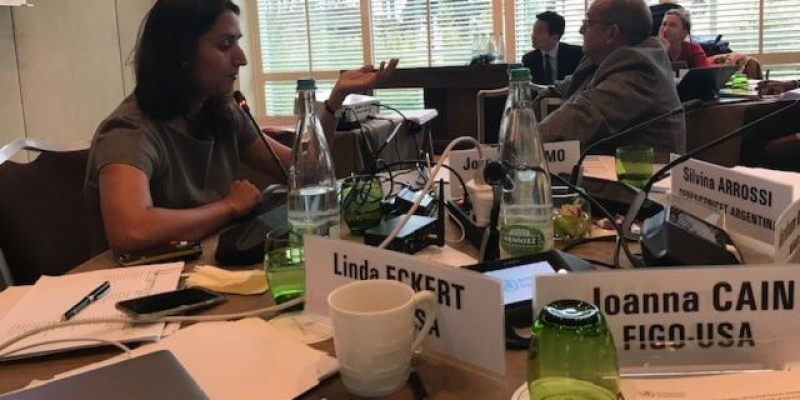 Nearly 90 percent of those deaths are in low- and middle-income countries, making cervical cancer a story of inequality as well as unnecessary pain and grief. It’s one that FIGO, working alongside the World Health Organization (WHO), UNFPA and partners, aims to dramatically change.

Our Global Declaration on Cervical Cancer Elimination was signed in front of 11,000 OBGYNs from around the world in October 2018, aligning FIGO’s expertise and worldwide network to the call for action Dr Tedros Adhanom Ghebreyesus, WHO Director-General, gave us during our Official Side event at the 71st World Health Assembly.

WHO has brought together seven Cervical Cancer Working Groups for a comprehensive approach to elimination. This month two leading FIGO experts, Professor Joanna Cain (former Chair of the WHO Screening Guideline Group) and Dr Neerja Bhatla, (Chair of FIGO’s Committee for Gynecologic Oncology) were pleased to join the efforts.

As the leading professional society in the field of gynecology and obstetrics, FIGO has a critical role to play in updating recommendations and scaling up global access to life-saving screening and treatment for cervical cancer. FIGO members are embedded on the frontlines of health, wellbeing and equity for women in 132 countries, and we are committed to solving this preventable tragedy we see playing out so unfairly.

The targets are set: by 2030, 70 percent of the world’s eligible women must have at least one screening, and 90 percent of those screened positive must receive treatment.

The most effective way to prevent cervical cancer is vaccinating adolescents against the human papillomavirus (HPV). But it’s essential that prevention cover women beyond the age when immunisation will be effective, just as treatment must be made available to those already suffering from the disease.

The working group will outline necessary steps ready to launch by 2020, with six key areas of focus:

Following the initial meeting in Geneva, the seven working groups will build support for scale up of activities in targeted national and regional areas via standards and collaborative networks. Results will be finalised by mid-2019, ready for launch.

The working group made initial proposals that will begin the groundwork of information, increasing support to achieve the scaling up of activities in targeted national/ regional areas, and creation of standards and collaborative networks to carry the goals forward.  More will be available as the results of the various subgroups are finalized over the first 6 months of 2019.