16 Days of Activism – What have our Members been up to? 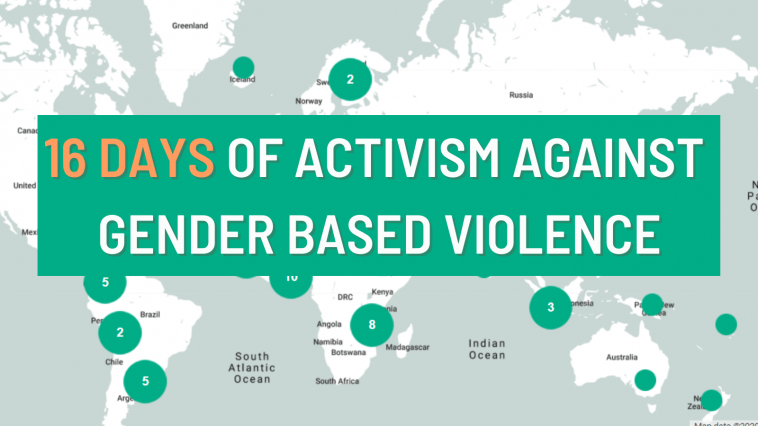 Today marks the end of the official 16 Days of Activism against Gender-Based Violence, which falls on International Human Rights Day. This year’s theme was ‘Orange the World: Fund, Respond, Prevent, Collect!’ We spoke to some of our Members of the Human Rights, Refugees and Violence Against Women Committee about the activities they carried out to ensure that awareness around the theme of the 16 Days was increased and to increase commitment to the elimination of this tragedy.

Dr Diana M. Galimberti from Argentina, tells us how, alongside colleagues, they committed to addressing violence against women in Latin America.

“Dr. Miguel Gutiérrez Ramos and I committed to address the topic of sexual abuse and violence throughout Latin America when in Istanbul. Although in El Salvador, Guatemala and Argentina we received immediate support for our activities, the worldwide quarantine impeded continuation of this project until mid- 2021. However, Dr. Gutiérrez has actively participated in several meetings that were nevertheless held: at the University of Santa Fe in October of this year, where I acted as coordinator; once at a nation-wide course for obstetricians in Peru, and he will be a speaker at a meeting on sexual and reproductive rights in Arequipa, Perú shortly. He habitually represents the topic of GBV from FIGO perspective at the professional meetings he attends.

During times of war, general disruption of the normal way of life conduces to higher levels of violence in society.

Argentina is one of the most advanced countries in facing GBV against women and girls. Social programmes, judicial backing and general campaigns are forwarded by the Ministry of Health and also the Ministry of Justice and Human Rights. A federal survey for all health workers has recently been launched and, based on its results, training programs on GBV will be instituted in all public hospitals of the country.”

Dr Chiara Benedetto, Chair of the FIGO Subcommittee for Refugees, explains the current situation in Italy and what they are doing to advocate for an end to violence against women.

“Winning rights for girls and women is about more than giving opportunities, it is also about changing how countries and communities work, and how the fabric of society evolves.  It means investing in a fairer, more equal society, free from violence. Indeed, we are living through a trying time where Gender Based Violence (GBV) is ever more “behind locked doors” as the waves of the COVID Pandemic confine victims with perpetrators. In Italy, there were 91 feminicides in the first 10 months of 2020, i.e., 1 every 3 days and a 73% increase in requests for help to the various associations (Istat -The Italian National Institute of Statistics).

In line with FIGO’s declarations on Violence Against Women, … “we recognise that violence against women and against girls is highly prevalent and may be exacerbated in situations of crises such as conflict, displacement and among refugees.” Indeed, we are in constant contact with our migrant focus group members, also through emergency numbers and assistance. Despite the COVID Pandemic and the heavy restrictions on meetings/congresses in person, numerous initiatives have been, and will be taken in Italy to raise awareness as to GBV, including a webinar, video appeals, and a number of online meetings and initiatives.”

Dr Colleen McNicholas from the United States comments on their situation and what we need to do to centre the most vulnerable.

“The United States continues to provide example after example of why the work of addressing and eliminating human rights violations, especially acts committed against minority communities, is so important. The devastating revelation of forced hysterectomies and sterilisation on migrant detainees reawakened an awareness of the shameful history this country has of prioritising the fertility and reproduction of some while decimating others. When I think of the most impacted by violence against women, I can’t help but acknowledge the horrific rates of murder amongst transgender women, particularly women of colour. If raising awareness about gender-based violence is to have a meaningful impact, we must centre the most vulnerable.”

From Mexico, Dr Atziri Ramirez tells us about online support groups for victims of violence.

“I have committed myself to an online facebook group called "Feminist Doctors" where we touch upon several topics one of them regarding "how to educate and disseminate the Violentometer" which is a scale where a woman can realise that she is being a subject of violence. We have concluded that a good way is by posting this information in groups and offering access to public resources (such as public telephone numbers of agencies that are supporting women who are victims of violence in their homes). Following the line of online content I also became part of a group called "Trueka Feminist" which supports victims of violence by online trade. I have disseminated this information among my peers, undergraduate students and trainees. “

Finally, Dr Taghreed Alhaidari shared posters that were created by the Iraq Member Society which were published on social media, highlighting facts and figures on the rates of GBV.

We hope these examples inspire you to continue to carry out this important advocacy work and help to eliminate violence against women, beyond the 16 Days of Activism. For more resources on GBV and the 16 Days, visit the UN website.