Misdiagnosis and treatment of placenta accreta spectrum (PAS) disorders, a high-risk pregnancy condition that occurs when the placenta grows too deeply into a woman’s uterine wall, is a significant maternal health challenge.

Safe and effective care of a woman with a placenta accreta spectrum disorder depends on timely diagnosis. Unfortunately this is often limited by the wide range of related conditions, and varying use of clinical criteria to define them. 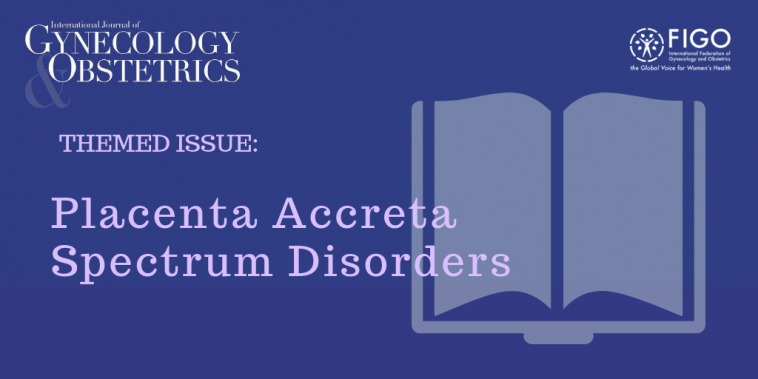 FIGO addresses this problem head on in a recent review article in the International Journal of Obstetrics and Gynecology (IJGO): FIGO classification for the clinical diagnosis of placenta accreta spectrum disorders.

Early studies of placenta accreta described all cases similarly: a placenta sticking fast to the uterine wall without easy separation and/or bleeding, and absence of the usual layer between the placenta and middle layer of the uterus.

In the 1960s, researchers recognised a broader spectrum of placenta accreta spectrum disorders, but authors of the new classification identify a persistent lack of interest in accurately differentiating between forms or standardising terminology.

With so many different criteria all purporting to represent placenta accreta spectrum, but without any attempt to differentiate between adherent and invasive forms, it is unsurprising that there is a wide variation in the reported prevalence over the last 30 years.

The confusion is problematic for two reasons.

In the immediate moment it can be life-threatening, because different forms of placenta accreta spectrum have very different outcomes and require different management, with varying risk of severe bleeding, complications and need for surgical intervention. Placenta accreta disorders have become a leading cause of peripartum hysterectomy, maternal morbidity, and even mortality.

In the long-term, the variety of terminology limits academic understanding. Leading medical journals are unlikely to publish articles on conditions that do not have universally-accepted diagnostic criteria and terminology, and wide variation in methodologies limits accuracy of data from cohort studies.

Grade 1: abnormally adherent placenta (placenta adherent or creta) - attached directly to the surface of the middle layer of the uterine wall (myometrium) without invading it

Said Professor Eric Jauniaux, co-chair of FIGO’s Committee for Capacity Building in Education and Training (2012-2018) and the lead developer for the FIGO guidelines on placenta accreta spectrum disorders (2015-2018),

FIGO’s new classification for the clinical diagnosis will improve understanding and reduce overtreatment and diagnosis-related anxiety for many patients. By tackling the confusion of diverse descriptions, and standardising criteria for describing different grades of accreta placentation, the new classification can support development of better management strategies that should ultimately improve maternal health outcomes.

As part of work to improve the accuracy of placenta accreta spectrum diagnosis in the international literature, the authors propose additional reporting guidelines for future clinical research.

Adherence to this new FIGO classification will improve future systematic reviews and meta‐analysis and provide more accurate data, which is essential to improve clinical outcomes for increasing numbers of women around the world.