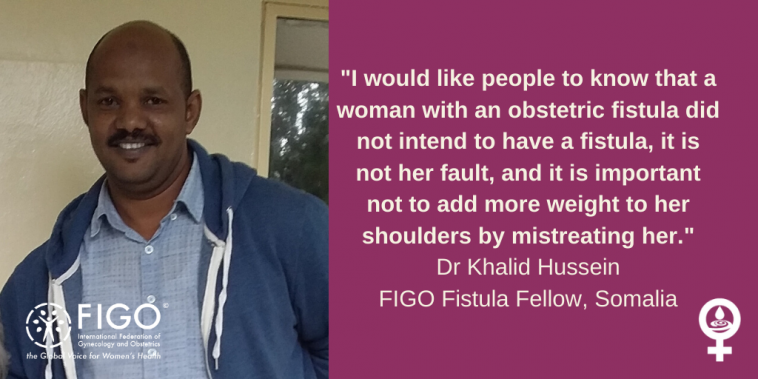 It is estimated that only one woman in 50 has access to fistula treatment.

This month FIGO spoke with Dr Khalid Hussein about his experience of being a fistula surgeon.

I was inspired to become a fistula surgeon because of one fistula victim. She came to hospital to wash her hands of her suffering and sadly, at that time, I was not able to help her to smile again.

I would like people to know that a woman with an obstetric fistula did not intend to have a fistula, it is not her fault, and it is important not to add more weight to her shoulders by mistreating her.

It will be difficult to end fistula without addressing two major issues. The first one is to do with the community: we need to reach rural places to raise awareness about how certain traditions and customs can lead to the occurrence of obstetric fistula.

Success stories always have a special place in the memory. Nevertheless, the sad stories always stay at the forefront of our minds. I would like to recount the story of one patient who did her best to overcome all the barriers to get to hospital and get rid of her fistula; both the physical and psychological impact.

Ayesha is a 17 year old girl who lives in Somalia. Her dream was to go to school and learn, but unfortunately she never had an opportunity to attend a single class because her family lived a life of hardship. There are many sociocultural limitations on girls’ education in Somalia, especially in rural areas.

At the age of 17, she was forced to marry her cousin in order to keep the dignity of herself and her family, as is the traditional practice in rural parts of Somalia. She had accepted the marriage to please her family elders and live the life they had designed for her.

One year later, Ayesha got pregnant with her first child; the news gave her hope for a better life and the joy of motherhood. This hope did not last long as she woke up one night with vaginal bleeding that lasted until the morning, and ended with a miscarriage of her expected child. This news broke Ayesha’s heart and hopes for the future.

Months later, she got pregnant with her second child and this time around she tried to take care of herself and the baby by eating the best that she could. She experienced many pregnancy-related symptoms, including morning sickness, heartburn and constipation, but she never had the opportunity for antenatal care as there were no health services in her district.

One day, labour pains began and she continued labouring for two days without the support of a qualified health professional.  On her third day in labour, she gave birth to a dead baby, the child had died because of the prolonged labour. After giving birth she realised that her urine wasn’t under her control, her bed was wet. She realised then that she might have a condition that other women in her village similarly had after their deliveries. But, she did not know anything about the condition and could not see a health professional for guidance, diagnosis and further advice. She isolated herself in the house and did not meet other girls her age to socialise. People were talking to each other about her situation and some of them even called her “the urinator”.

Eventually, Ayesha heard that she might be able to get help at a hospital 150km away. Despite the unsecure roads and her social and financial barriers, she arrived at the hospital with dreams to be like other girls. At the hospital, we examined her and we witnessed her smiling and her happiness believing that soon she would no longer suffer.

Unfortunately, she has a fistula and bladder rupture that would be complex and need more than two surgeries to repair. Currently there aren’t any fistula surgeons with such skills in Somalia. Her facial expressions at the moment I told her this will never leave my memory, I was the one who witnessed her smiles and who also saw her disappointment. She is still in contact with the hospital counsellor and is waiting for hands that can take her out from her grave.

Being a FIGO Fellow

Being a FIGO Fellow means a lot to me. It was very difficult when I first faced a fistula patient who was looking for someone to relieve her suffering. At the time I was a Gynaecologist in the hospital that she had eventually reached after facing many challenges. But her fistula was very complex to repair and it was so hard to tell her that the surgery would be too difficult for me to do. It was painful to watch her leave the clinic with her feeling of disappointment.

Being a FIGO Fellow will enable me to become competent in managing all types of fistula. As well as being a fistula surgeon, being a Fellow will also mean I can eventually participate in providing training to other surgeons.