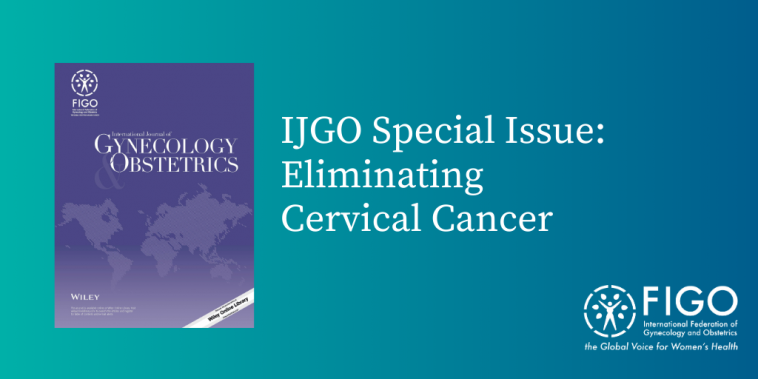 We are proud to announce that the International Journal of Gynecology & Obstetrics (IJGO), FIGO’s official scientific journal, has released an open access Special Issue on the Elimination of Cervical Cancer. Earlier this year, we released an updated statement on the elimination of this largely preventable disease, which called for our Member Societies to collectively commit to solving this issue by 2030. This free-to-view issue contains Review Articles from various countries on topics such as the diagnostic accuracy of HPV tests, a number of Clinical Articles, as well as a Special Communication article on girl-centred HPV campaigns.

On 17th November, the World Health Organization launched its global strategy to accelerate the elimination of cervical cancer, marking the historic call to action from WHO Director General, Dr Tedros, two years earlier. The strategy asks ‘Why cervical cancer, why now?’ and calls for collective action to improve the accessibility of treatments, as we already have the knowledge of what works in preventing the disease. IJGO’s editorial from Dr Nothemba Simelela, the WHO’s Assistant Director‐General, provides some answers to these questions.

The Special Article, ‘Acting on the Call,’ offers a framework for action for the rapid acceleration of access to the HPV vaccine, specifically for low- and middle-income countries (LMICs). The framework for action calls for new strategic thinking to consolidate global learning and invigorate operationalisation at a country level. This framework is an example of a method that can be applied to an organisation’s outputs to ensure their activities are aligned with the WHO global strategy.

There is also research on the success of specific ‘girl-centred’ campaigns, which aimed to increase and sustain the uptake of the human papillomavirus (HPV) vaccine. Additionally, one of the papers evaluated case studies from Bangladesh and India and found that programme organisation, rather than the choice of test, determines the success rate of cervical cancer screening.

Read the open access Special Issue here, which contains research and data with practical applications to influence and help form your own organisation’s strategy on eliminating cervical cancer. Together we can eliminate this disease by 2030 – we have the resources, and now we must commit to making these resources accessible.