Riding on the green wave of civil society’s victory in Argentina to achieve the legalisation of abortion upon request up to 14 weeks of pregnancy, FIGO’s Advocating for Safe Abortion Project (ASAP) organised a live-broadcast discussion with OBGYNs and human rights advocates. The discussion unpacked the lessons of how the change in law was achieved and the impact of the law in Argentina and across Latin America.

Argentina’s abortion law is a ground-breaking step in eliminating discrimination against women and girls, and in addressing the scale of unsafe abortion – a public health crisis in Argentina. It is estimated that 500,000 abortions occur every year in Argentina, representing 40% of all pregnancies. Annually, unsafe abortion accounts for 18% of pregnancy-related deaths and more than 50,000 preventable hospitalisations in Argentina.

The success of Argentina’s campaign: rooted in a multidisciplinary approach

The new law represents the culmination of a concerted and multidimensional campaign led by the feminist movement within Argentina and across Latin America, supported by health workers and advocates in political, faith-based, social, health and human rights fields.

The result is a progressive and inclusive law that represents a roadmap for the rest of the region. As explained by Mariela Belski, Human Rights Lawyer and Executive Director of Amnesty International Argentina, “One thing we can learn from Argentina is that finally people who are pregnant as a result of rape will not have to document their experience in order to ensure access to safe abortion.” When advocating for change, this is a crucial legal element to ensure that all people can access safe abortion after rape.

In addition to this, Belski highlighted the success of having a law that is gender inclusive.

“We are heartened to see that the law is fully inclusive of non-conforming genders, and recognises that transgender men and boys, intersex and non-binary people fall pregnant. However, this means that further training should be included on how best to support them.”

According to Dr Analia Messina, an OBGYN from Argentina and consultant for the National Directorate of Sexual and Reproductive Health and UNFPA, the legalisation of abortion in Argentina is the start of a long journey to ensure access to safe abortion in Argentina. Many more changes will be necessary to improve the efficacy of the law on the ground.

In fact, Dr Laura Gil, an OBGYN from Colombia and member of FIGO’s Safe Abortion Committee, highlighted that beyond the legislative barriers in place as a result of religious and political objections, there also exist regulatory barriers, issues of poor service delivery and a lack of awareness of existing rights. According to Dr Gil, it is vital that the OBGYN community are aware of the many barriers in accessing safe abortion and find allies within the legal community to overcome them.

An example of such a barrier is the fact that ‘conscientious objection’ was immediately exploited by the anti-choice movement in an effort to restrict application of the new law in Argentina. ‘Conscientious objection’ is only applicable to physicians performing a medical procedure, and not for the many staff involved in the overall process of accessing a safe abortion. In addition, under the new law, anyone who is not willing to perform the procedure must refer the individual seeking an abortion to a provider who can provide the service within 10 days.

According to Dr Messina, these provisions have the potential to improve access to abortion and “establish a new basis in the law, which creates a judicial and legislative norm”. Yet, Dr Gil flagged that there is a large amount of misinformation on the subject that continues to be misapplied when it comes to providing abortion care, and so education and awareness-raising are essential to the continued provision of safe abortion. 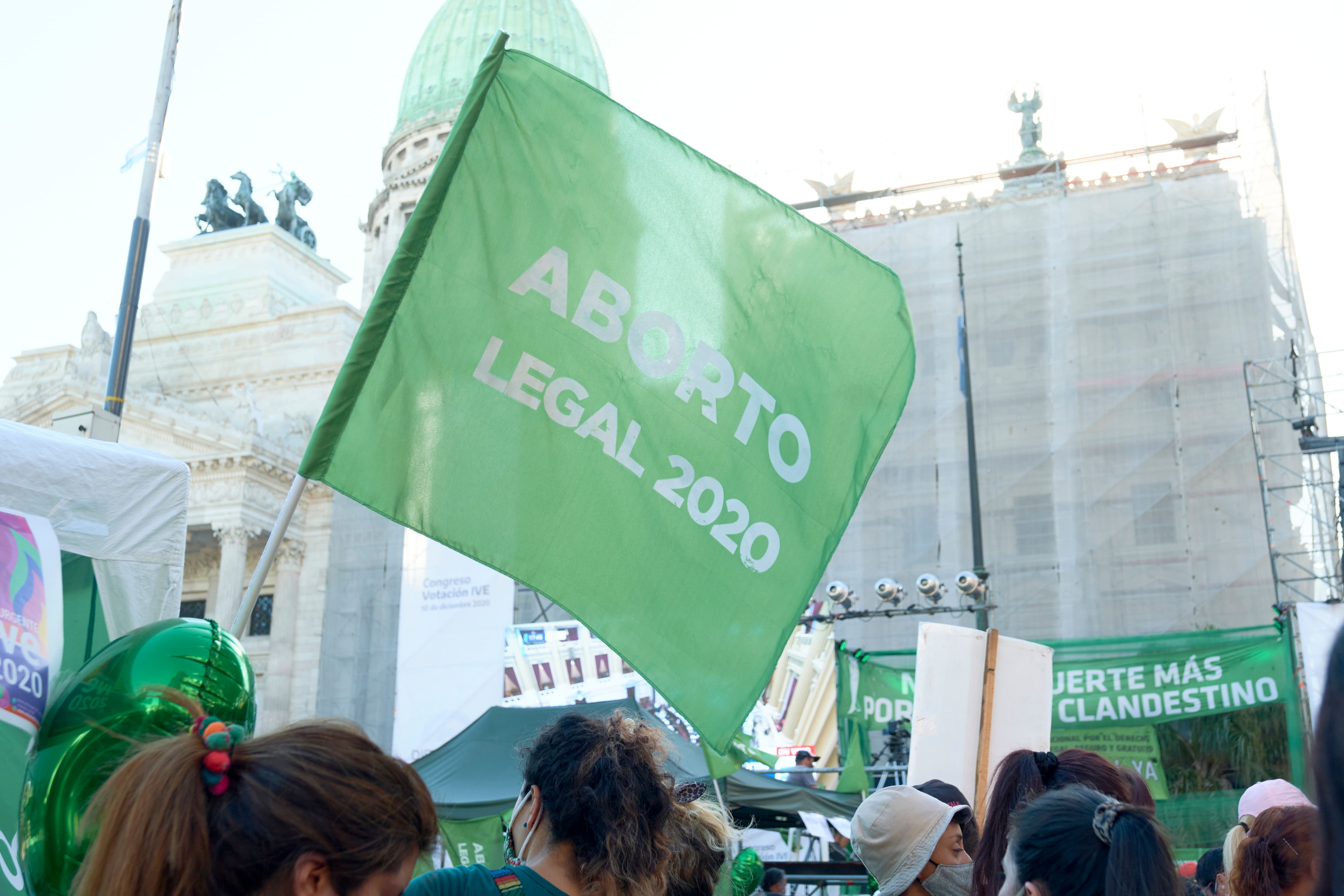 Dr Analia Messina was at the forefront of the legalisation of abortion campaign in Argentina. She highlighted the importance of a multidisciplinary approach and stressed the role of OBGYNs in providing data on public health and maternal mortality due to unsafe abortion.

“We presented evidence at both legislative chambers that argued the case for the health economy, and presented the cost reduction of 88% through the use of misoprostol compared to the estimated cost of care through [treating] clandestine abortion complications.”

The critical role of health care providers in compiling evidence and working in partnership with advocacy networks cannot be underestimated: they can capitalise on their frontline position to collate and present robust clinical evidence. The data provided to the legislative chambers underscored the need to see abortion as an essential health care procedure, and as a necessity to prevent maternal deaths and disabilities.

Fundamentally, health care providers must see themselves as women’s health advocates. Dr Gilshared that through her work with FIGO, she is also able to influence and leverage various formal statements to push for change within national bodies in Colombia, such as the Colombian Federation of Obstetrics and Gynecology (FECOLSOG). She argued that at the centre of the discrimination faced by those seeking abortions is “the failure to recognise women’s self-determination” as a human right.

In addition, FIGO President Dr Carlos Füchtner, highlighted the need for OBGYNs to recognise their role in working beyond health care to implement change and seeing their role across and within society.

“In a way, the societies, the OBGYNs, we can be the problem as well as the solution. We have to be taught to be the solution to the problem, and we don’t have to do this as individual societies alone... we can work across the board to support abortion, not only on a health level, but also on a social and political level.”

According to Dr Atziri Ramirez, OBGYN in Mexico and President of the World Association of Trainees in Obstetrics and Gynecology, it is essential that OBGYNs and other health care providers are educated and empowered to promote comprehensive reproductive autonomy.

“Education changes [people], the need for the inclusion of comprehensive abortion care in the curriculum is crucial to ensuring that these changes can be effectively implemented. We need to work with other health care professionals – not only with physicians, but also with nurses, social workers, psychologists. It's a complete network of support and we have to work as a cohesive system.”

As underscored by Dr Miguel Gutierrez, Past President of the Peruvian Society of Obstetrics and Gynecology and coordinator of FIGO’s Advocacy for Safe Abortion Project, campaigning for changes to the curriculum, both nationally and internationally, remains one of the clearest methods to advocate for change as a health worker.

“We have to include changes in health care provision which recognise sexual education and women’s reproductive autonomy... when we talk about normalising abortion as a health care service, we would be eliminating stigma, which I think is one of the main barriers that exists.”

Dr Gutierrez flagged the importance of a dedicated and persistent approach to de-stigmatisation at various levels of health care workers. He also highlighted the holistic approach of FIGO’s ASAP, and stressed the difference between providing information on abortion – a fundamental part of effective health care – and actively promoting abortion. These nuances must be understood by health care workers when adapting their advocacy to different audiences, to bring together different groups of people to support access to abortion as a human right.

In many of the more conservative Catholic societies of Latin America, this distinction is important for building solidarity to provide free, legal access to safe abortion. In fact, Mariela Belski highlighted the significance of abortion being legalised in the country of origin of Pope Francis, and the influence this has had across the religious Latin American region.

Overall, FIGO’s discussion on how health workers and advocates can leverage the Argentinean experience to legalise access to safe abortion was broad-ranging and engaging. We heard a number of different perspectives, all of which ultimately aligned to highlight the need for health care providers to engage with the campaign, and to use their positions of privilege and access to advocate for women and girls.

Abortion is a time sensitive, essential medical service – one that should be provided in accordance with women and girls’ preferences, and with safety, privacy and dignity at the forefront. Reproductive autonomy, including access to safe abortion services, is a basic and non-negotiable human right.

Webinar: How health workers and advocates can leverage the Argentinean experience to legalise access to safe abortion 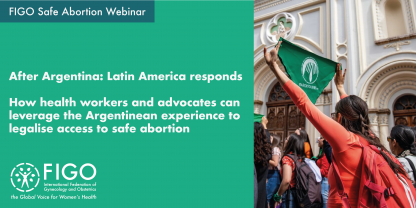 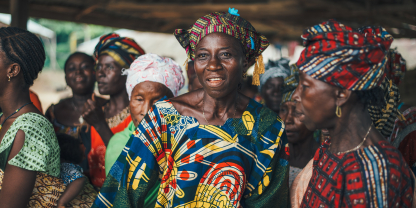