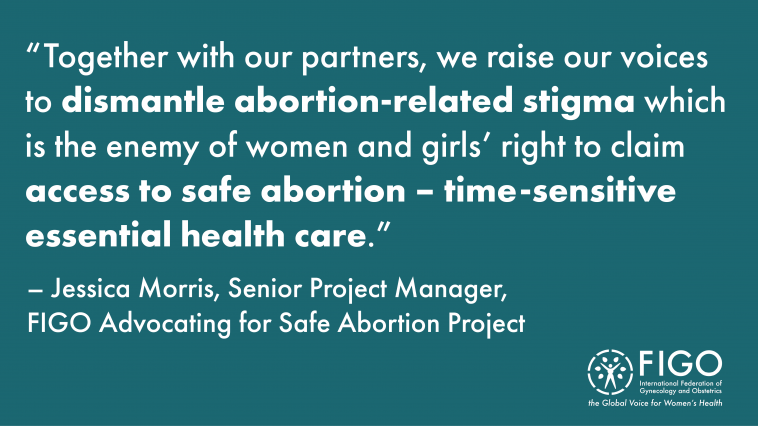 For International Safe Abortion Day (ISAD), marked on 28 September, the 10 national member societies FIGO supports through its Advocating for Safe Abortion Project developed educational activities and awareness-raising campaigns in their countries and communities.

International Safe Abortion Day is about making what is often ignored – the preventable pandemic of unsafe abortions -  visible. As a committed health care community we come together to demonstrate what solutions must be implemented. Together with our partners, we raise our voices to dismantle abortion-related stigma which is the enemy of women/girls’ right to claim access to safe abortion – time-sensitive essential health care.

This year from Latin America to Africa we are proud to share the efforts of our OBGYN member societies, and all that they are doing to stand up for women/girls’ health care and human rights.

Additionally, Values Clarification and Attitude Transformation (VCAT) and sensitisation workshops were held for 21 journalists in Maputo and 50 others in the provinces to encourage understanding and acceptance on safe abortion care.  AMOG also organised an advocacy training session for their whole network, as well as a workshop to discuss ‘conscientious objection’ in health care providers, including for members of the Association of Nurses of Mozambique.

It is true that it takes some courage to adopt this position, especially when no one else is willing to provide safe abortion services within the limits of the law. Discussions with colleagues and health authorities may be necessary, but what we cannot do is remain indifferent, while the women who need our care suffer the consequences of our lack of courage to take responsibility for professionals.

– Dr. Eliana Coelho, speaker and member of the AMOG Executive

The Association of Obstetricians and Gynaecologists of Uganda (AOGU) worked as part of the Coalition to Stop Maternal Mortality from Unsafe Abortion (CSMMUA) for ISAD. The coalition took part in a joint ministerial meeting on the issue of abortion. NTV, Uganda’s most popular TV station, covered the event live,  enabling AOGU and its partners to reach a great number of Ugandans with their message.

In addition, AOGU’s President-Elect was chosen by the coalition to give a keynote address as part of a televised public dialogue around the theme 'making laws responsive to women's needs'.  Highlighting the need to break the stigma around abortion access, Dr Othiniel Musana, AOGU President Elect, said:

The term abortion has been misused in the medical-political-cultural-religious arenas to discriminate, deny services, criminalise, punish, condemn and especially stigmatise the women and girls who have experienced an abortion regardless of the reason. Abortion is a medical term that simply means a termination of pregnancy regardless of the reason it occurs.

In Chipata, ZAGO invited the Mayor to deliver a keynote speech during the local ISAD commemoration event. He commended ZAGO for sharing knowledge and information about safe abortion, and encouraged the society to continue its efforts:

I wish to implore ZAGO to reach out across the country, particularly rural areas. It is through these awareness campaigns that we are now witnessing a downward trend on women and girls using dangerous objects. What we are all against and want to prevent is unsafe abortions which have proved to be deadly.

Each chapter of the Société de Gynécologie et d'Obstétrique de Cote d'Ivoire (SOGOCI) organised a local radio broadcast on the topic of safe abortion and SOGOCI also held a press conference in Abidjan with 20 journalists from different media.

In Mali, the Societé Malienne de Gynécologie Obstétrique (SOMAGO) focused on raising public awareness of the risks of unsafe abortion on ISAD with a march around Bamako (the Malian capital city) which included young people sharing knowledge and resources with their community. 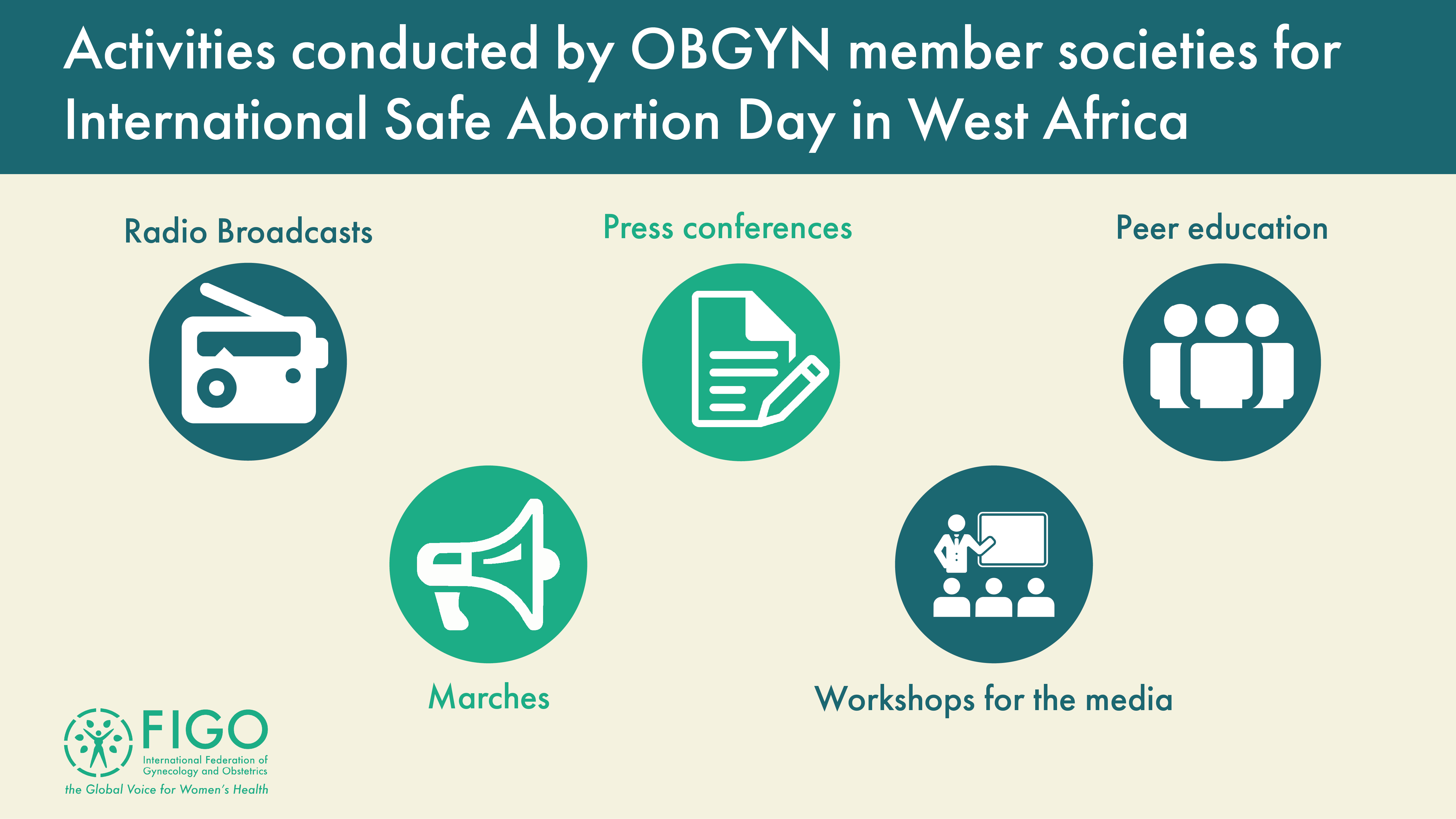 The Collège National des Gynécologues Obstétriciens du Bénin (CNGOB) continued its focus on peer education work with their two partners, ONG Gbewa and the Association of Women Lawyers of Benin. The CNGOB organised various events, including a meeting to bring together their network partners in Cotonou. CNGOB’s contributions on ISAD were given a further boost as Benin has successfully expanded access to safe abortion by the passing of a new legal amendment on the 20 October 2021. CNGOB is working to ensure the new legal amendment is fully implemented, and we hope this will result in a positive ripple effect across West Africa.

The Society of Gynecologists and Obstetricians of Cameroon (SOGOC) held a workshop one week before ISAD with 16 media partners, which included journalists from national and private media, bloggers and influencers. The workshop covered how media can access accurate, reliable information on data (including how to use evidence collected by SOGOC), and how they can use human rights as well as public health perspectives in order to strengthen non-judgemental reporting on the issue. Fifteen of the attending partners followed up by posting articles across various media on 28 September to mark ISAD.

To show its solidarity with ISAD, the Sociedad Panamenã de Obstetricia y Ginecología (SPOG Panama) organised a public march to call for an improvement of access to sexual and reproductive health and rights, including access to safe abortion care. Over 170 people participated in the walk, which covered a distance of nearly four kilometres. SPOG also organised a live virtual panel, which reached over 4,500 people including key allies from the Ministry of Health and the United Nations.

Due to continued Covid-19 restrictions, the Sociedad Peruana de Obstetricia y Ginecología (SPOG Peru) chose to deliver this year’s ISAD event online. The event took the form of a webinar for over 280 medical students, organised in partnership with the Ministry of Health, the leading sexual rights NGO PROMSEX, and the SPOG executive board. The webinar aimed to highlight the existing and continued barriers to safe abortion access in Peru, and to underline SPOG’s and other actors’ commitment to providing those seeking safe abortions with quality care and guidance.

Sharing three perspectives (government, medical, and civil society), the webinar opened with a statement of support from the regional federation Federación Latinoamericana de Sociedades de Obstetricia y Ginecología (FLASOG), and concluded with Project Manager Dr Enrique Guevara’s assertion that it was the duty of the younger medical students to continue campaigning for safe abortion access.