Menopause, a normal part of aging

Menopause is a normal part of ageing, and should not be viewed as a disease. For some women it can even be a positive experience. However, for many it can have a significant negative impact on their health. 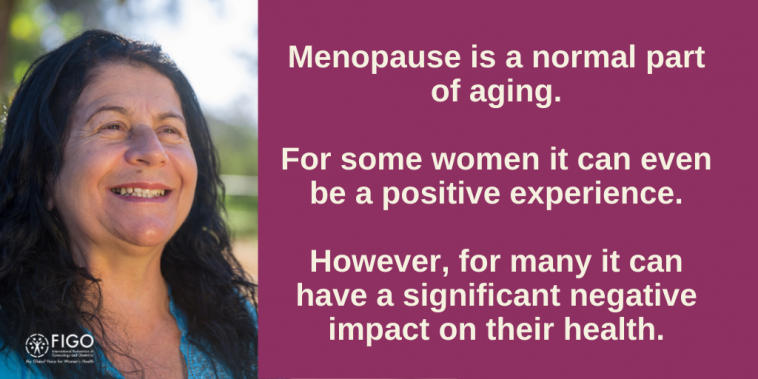 The menopause is a natural event in a woman’s life that typically takes place between 45 and 55 years of age, as oestrogen levels decline. Menopause is a normal part of ageing, and should not be viewed as a disease. For some women it can even be a positive experience. However, for many it can have a significant negative impact on their health

In line with the Beijing Platform for Action which calls on societies to actively address and treat the health needs of older women, FIGO were pleased to collaborate with NCD Alliance and HelpAge International during a high profile session at this year’s Women Deliver event in Vancouver to explore ways to increase women’s access to quality health care throughout the life cycle.

Well-known menopausal symptoms include hot flushes, night sweats, discomfort during sex, difficulty sleeping, low mood, and memory problems. However recent research points to links between menopause and a wider range of health issues. For example a 2017 study by researchers in China suggests that menopause is associated with problems in the lumbar area of the back, as oestrogen deficiency seems to cause spinal discs to degenerate more quickly.

In 2015, for the first time, the UK’s National Institute for Health and Care Excellence (NICE) produced guidance for clinicians on treating menopausal symptoms, and recommended Hormone Replacement Therapy, lifestyle changes, and Cognitive Behavioural Therapy to address anxiety and low mood.

In addition to supporting women through the experience itself, the menopause gives health providers an opportunity to assess a woman’s health as she enters another stage of her life. Population projections suggest that by 2050 there will be 1.5 billion people who are over 65 in the world, compared with 531 million in 2010. At least half of these will be women.

As well as age-related illnesses such as osteoporosis, older women experience sexual and reproductive health issues beyond the menopause. For example, the health effects of repeated pregnancies and complications like fistulae or pelvic organ prolapse can be long lasting, or appear some years later.

“After I went through the menopause, I noticed I had started bleeding. I have a background as a health professional, so I knew this was not right. I went to the gynaecologist and she said my uterus had enlarged. Thankfully it wasn't cancerous yet, but it was decided I should have a hysterectomy. As I was retired, I was not eligible for free treatment.

My husband and I had to put our monthly pensions together to be able to afford my surgery. It cost around $300. I was lucky I had the power and knowledge that comes from working in healthcare - I knew something was wrong and sought help.

But many older women in my country of Uganda do not have the same power or privilege. Many live in rural areas, have low incomes and live miles from health centres. They're not included in health education initiatives, so the situation can be fatal for them.”

Older women may also be at risk of health problems arising from violence, neglect, or poverty, often experiencing compound discrimination because of their age and their gender.

Poor health not only causes suffering and damages the quality of life of individual women but has a knock-on effect, as older women in many communities play a vital role as midwives and carers and hold valuable knowledge about agriculture and household management. However this social and economic contribution is often overlooked because their labour is unpaid.

The severity of these issues can be disguised by data systems which fail to collect information on women over the age of 49, rendering older women and their needs invisible when programmes and services are being designed.

Older women’s voices must be heard and their health needs discussed as part of a life-cycle approach to healthcare which recognises the dignity and rights of women at every age.

For more information, take a look at the information hub about Menopause from our National Member Society, the Royal College of Obstetricians and Gynecologists (RCOG).