Milestones in the movement for safe motherhood (2012) 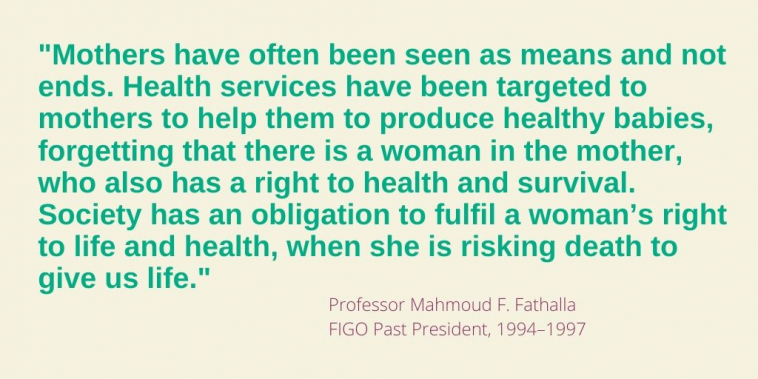 Although maternal mortality has long accounted for a significant proportion of deaths among women of reproductive age in low resource countries, its importance was not always evident from official statistics. The majority of maternal deaths simply went unrecorded, or the cause of death was not specified.

It was only relatively recently that systematic efforts have been made to collect valid data from different sources on the prevalence of maternal mortality. The world woke up in the early 1980s to hear that an estimated half a million women were losing their lives every year in pregnancy and childbirth. It was then that many of us felt that maternal mortality in low income countries was the public health scandal of our time, and something had to be done about it.

The story of “Why did Mrs X die”

A woman in a low income country often embarks on the risky journey of pregnancy and childbirth, already burdened with a heavy luggage of social injustice, accumulated from when she was an infant and was not considered her brother's equal.

She may be married while still a young adolescent. As a married woman, she is denied any choice in life except childbearing and child rearing. She does not have access to family planning information and services. As a pregnant woman, she does not have the benefit of simple community-based health services. As a woman in labour, she is unlikely to have any skilled birth attendant at her side. When she develops a life threatening complication, she does not have access to timely transport and emergency obstetric care. She finally dies in this wilderness of social injustice. The ultimate tragedy of maternal mortality reflects this cumulative denial of women's human rights.

In 1987, at the meeting which launched the international safe motherhood initiative in Nairobi, I presented this concept about maternal mortality in low income countries with the metaphor of a slippery road, with millions of women marching along it, looking for safe exits. The fortunate among them find a path off the road. Many are barred access to these exits, and continue their tragic march towards death at the end of the road.

This metaphor was illustrated in a video with the title of “Why Did Mrs X Die?”, produced by the World Health Organization, and made available in English, French, Spanish, and Arabic. The video follows the steps of one Mrs X in her journey along the road, without gaining access to any of the exits that could have saved her life.

FIGO members and the launch of the Save the Mothers Fund

When I was the President of the International Federation of Gynecology and Obstetrics (FIGO), we asked our member societies about their willingness and readiness to work together to demonstrate through action and document through research, that the lives of mothers can be saved, at a cost that is affordable to any society that upholds women's right to safe motherhood.

We were overwhelmed by the response. The limiting factor was to get the necessary funding. This is why FIGO established at the time its Save the Mothers Fund in 1997. Since then the movement has gathered momentum, with professionals from high and low income countries working together in dedicated partnership teams to demonstrate that motherhood can be safe even where resources are limited.

Pregnancy is special: Let us make it safe

The year 1998 was designated by the World Health Assembly to be the year for safe motherhood, WHO selected the slogan: “Pregnancy is special; let us make it safe”.

Maternity is not a disease. Pregnancy should not compete for allocation of resources on the basis of body count or life years lost. Pregnancy is a privileged bio-social function entrusted to women, to ensure survival of our human species.

Unfortunately, the noble task of motherhood has not brought societal rewards to women. On the contrary, it has often led to their subordination, and gender discrimination practices which, among other consequences, adversely impact on their health.

Mothers have often been seen as means and not ends. Health services have been targeted to mothers to help them to produce healthy babies, forgetting that there is a woman in the mother, who also has a right to health and survival. Society has an obligation to fulfil a woman’s right to life and health, when she is risking death to give us life.

Challenges in getting safe motherhood on the global agenda

Putting safe motherhood on the global agenda was not easy. Several challenges had to be met. Maternal mortality is a problem that does not impact on high resource countries. It is different from infectious diseases which can spread across borders.

There were people in the development community who argued, in good faith, that maternal mortality is a question of poverty. Eliminate poverty and maternal mortality will take care of itself. But the risks of pregnancy and childbirth do not discriminate between the rich and the poor. Only, these risks can now be managed.

Another challenge we met is that, to make pregnancy safer, we need a functioning health care system to be in place, which is lacking in many parts of low income countries. But this does not mean building new modern hospitals. In most cases, a lot can be achieved by a more rational allocation of available resources with more for those in more need, together with a modest infusion of new resources to upgrade existing facilities and improve the skills and performance of health personnel.

It also took some time to get the right to safe motherhood on the agenda of women’s movement. One of my early disappointments happened in 1995. The Fourth World Conference on Women was convened in Beijing, and an excellent Platform for Action was declared. Twelve critical areas of concern to women were highlighted, all of them are important and I fully endorse them, but one critical area was conspicuous by its absence: women’s right to safe motherhood.

The safe motherhood movement has achieved considerable success. But, some challenges remain to be worked upon. Mothers are not dying because of diseases we cannot treat, they are dying because societies have yet to make the decision that their lives are worth saving. Few women are in the position to make decisions about the allocation of resources. I was once asked what is the one prescription which I think women need most for their health. My answer was “power”.

Power is what women need to enjoy their right to health. Powerlessness of women, in my professional experience, is a serious health hazard, and particularly in maternal health. But women have to fill that prescription themselves and to keep a sustainable supply of it. No pharmacy will dispense it for them. When asked about the dose, my advice was to take as much as you get. There is no risk of over-dosage, and there are no reported side effects.

In 2000, representatives from 189 countries committed themselves to eight Millennium Development Goals (MDGs), including improving maternal health.

Safe motherhood did not rise on the development agenda only. In 1993, I published a scientific paper with the title “The neglected tragedy of maternal mortality in developing countries: a public health problem or a human rights issue?” How gratified I was when the United Nations Human Rights Council put preventable maternal mortality on its agenda of human rights violations in 2010.

Women’s right to safe motherhood is now recognized as a human right that should be respected, protected, and implemented, a right that implies both core obligations and progressive realisation.

Safe motherhood for all

The safe motherhood initiative has come a long way. Women are making advances, in strides and in all parts of the world, in securing their human rights and in asserting their real worth. The future is bright for women and mothers of the world as long as they are taking the future in their own hands.

I will not be around to see the dream of “safe motherhood for all” come true. But I pin my hope on the power of women, backed by the health profession, and supported by the global community.

This article is an edited version of a speech delivered by Prof. Mahmoud F. Fathalla, FIGO Past President (1994 – 1997) in London in 2012 to celebrate ‘On Safe Motherhood at 25 Years. Looking Back, Moving Forward’.