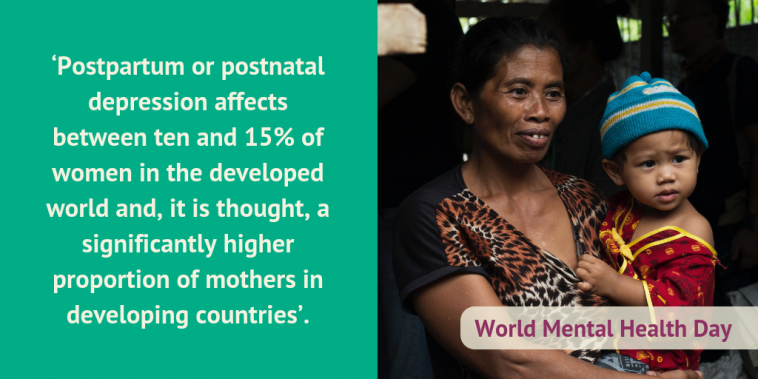 Organisations are beginning to recognise the need to address maternal mental health - but research suggests they should view it as a marathon, not a sprint.

Postpartum depression is a frequently overlooked issue, often passed off as 'the baby blues', or blamed on simple hormonal surges by those unfamiliar with its impact.

It can be an extremely serious problem for both mothers and infants, and one that is negatively affecting nations attempting to improve their maternal health statistics.

What is postpartum depression?

Postpartum or postnatal depression affects between ten and 15% of women in the developed world and, it is thought, a significantly higher proportion of mothers in developing countries.

It manifests in the same ways as traditional depression, but typically begins at any time during the first year after giving birth.

The main problems with postpartum depression lie in its ability to negatively affect maternal functioning and therefore have the potential to harm the child and its development, as well as the mother.

Indeed, children of mothers affected by postpartum depression can show impairments in cognitive performance, behaviour disturbance and attachment insecurity, while suicide is the second-most frequent cause of maternal mortality in the developed world.

What is being done to combat postpartum depression?

Although many Sustainable Development Goals (SDGs) still focus on maternal mortality, there is growing recognition that maternal mental health is equally important for good overall health.

Initiatives are already underway in many nations to better identify and treat postpartum depression and help reduce the lack of understanding - and sometimes stigma - surrounding it.

Many approaches towards treating postpartum depression have focused on short-term interventions, which studies have suggested are not particularly effective in bringing about lasting benefits for mothers or children.

Instead, new research published in The Lancet Psychiatry by a team led by Professor Alan Stein at the University of Oxford has indicated a far more long-term psychological intervention could produce sustained remission from depression.

The study looked at a group of postpartum women with at least three months' history of depression and randomly allocated them video-feedback therapy (VFT) or progressive muscle relaxation (PMR), alongside a lengthy course of cognitive behavioural therapy (CBT).

While there was no significant improvement in outcomes for either VFT or PMR, the researchers noted "striking" benefits in the ability of CBT to produce long-term remission from depression, with the effects lasting up to two years.

Professor Stein said the flexible delivery of 1.5-hour interventions by trained psychologists in women's homes targeting issues such as sleep, routines and self-care were likely to have contributed to these positive outcomes as women navigated difficult infant developmental stages.

"The finding of good maternal and child outcomes shows that excellent results are possible in the context of high quality service provision," the study concluded.

Unfortunately, this type of long-term intervention is not widely available anywhere at present due to the expense and existing pressures on service provision.

However, it may be that finding ways of getting around these barriers to delivery could be key in terms of improving treatment of postpartum depression and significantly boosting maternal health across the globe in the long term.