What is the psychological impact of miscarriage?

Miscarriage is a traumatic event which affects every woman differently, but can lead to grief, anxiety, depression, and even symptoms of Post Traumatic Stress Disorder (PTSD). 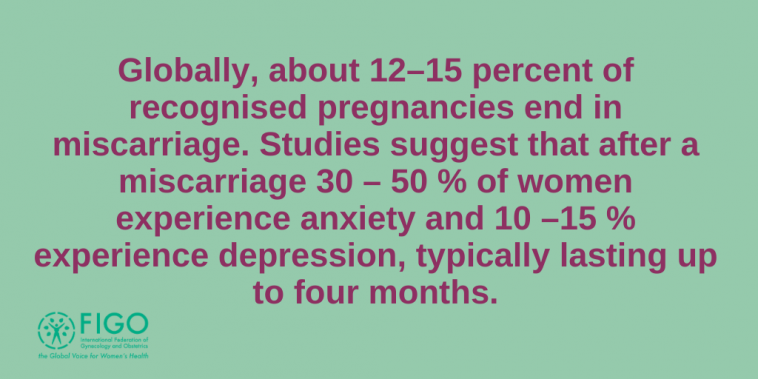 While maternal health professionals have advanced care for the physical effects of pregnancy loss, FIGO highlights a glaring oversight in the well-being of women who have experienced miscarriage: practices for psychological care are significantly less well developed.

According to the National Institute of Health and Care Excellence (NICE) in the UK, grief following miscarriage is “comparable in nature, intensity, and duration” to grief reactions in people suffering other types of major loss.

A 2016 study calls attention to the traumatic nature of a lost pregnancy: it found that four in ten women experienced PTSD symptoms within three months following either a miscarriage or ectopic pregnancy. PTSD symptoms reported by the study's participants included nightmares, flashbacks, and re-experiencing feelings associated with the loss. Some women also noted they attempted to avoid situations that would remind them of their loss, such as pregnant friends or relatives.

"At the moment there is no routine follow-up appointment for women who have suffered a miscarriage or ectopic pregnancy. We have checks in place for postnatal depression, but we don't have anything in place for the trauma and depression following pregnancy loss.

"There is an assumption in our society [UK] that you don't tell anyone you are pregnant until after 12 weeks. But this also means that if couples experience a miscarriage in this time, they don't tell people. This may result in the profound psychological effects of early pregnancy loss being brushed under the carpet."

Although a 2013 World Health Organization (WHO) review concluded that there is not enough evidence to recommend offering psychological support as standard following miscarriage, it suggests that follow-up appointments could help to identify women at risk of developing mental health problems or offer support to those who are already in distress.

The experience of miscarriage could further affect maternal mental health in subsequent pregnancies. A 2010 study found  that women who had experienced a miscarriage previously, even when they also had a living child, experienced more anxiety and pregnancy-specific distress than women with no history of miscarriage.

Poor maternal mental health has an immediate and long-term impact on women’s well-being. It limits opportunities for social and economic participation and reducing both self-care and care-giving capacity, in turn impacting children’s health and development.