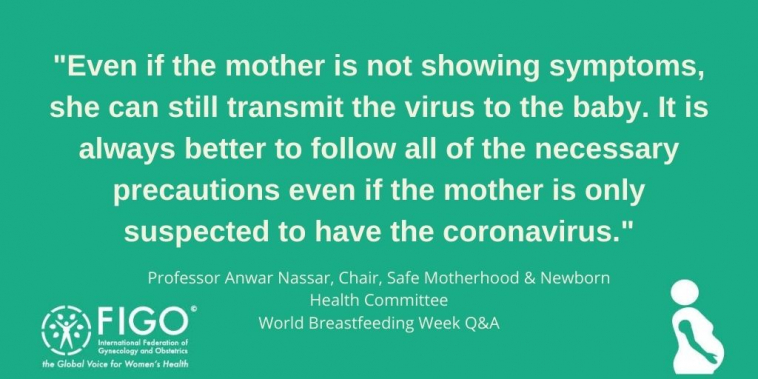 The 1st - 7th of August marks World Breastfeeding Week. This year, we interviewed the Chair of our Safe Motherhood and Newborn Health Committee, Professor Anwar Nassar.

Professor Nassar, answers some of the pressing questions many new mothers may have on COVID-19, breastfeeding, and outlines the benefits of breastfeeding to both mother and newborn.

Earlier this year, we released a statement on Safe Motherhood and COVID-19, with information on necessary precautions to take and details on antenatal care. You can read this statement here.

Breastfeeding contributes to the health and wellbeing of women and newborns, both in the short- and long-term. Why is this so?

Short-term, the mother is less likely to have postpartum heamorrhage, less risk of postpartum depression, less chance of anaemia, delayed menses meaning they will have a temporary measure of contraception.

The long-term advantages for the mother include less chance of ovarian and breast cancer, less likelihood of suffering from endometriosis, less instances of diabetes and hypertension, and better weight control.

For the babies, in the short term, they would have less problems in the GI tract, less instances of respiratory issues such as colds and pmneumonia, fewer ear infections, better vision in the long-term, fewer cases of bacterial meningitis, and fewer admissions to the hospital overall. They are also less likely to be absent from work later in life.

The benefits of breastfeeding do not stop in the short-term; later on in life they are less likely to be obese, there is less risk of them developing asthma, and even some cancers.

Has there been a change in attitude towards breastfeeding due to COVID-19? Are women favouring other methods?

The main concern with COVID-19 is the transmission from the mother to the baby. Initially the recommendations of some societies were to separate the mother for 14 days until she had recovered from the virus. This had only negative effects on the baby, which is why the newer recommendations is to allow breastfeeding but to take extra precautions when doing so.

What are the current recommendations for breastfeeding, for women with suspected or confirmed COVID-19?

The universal precautions apply, so a mother should be cleaning her hands regularly before she touches her baby. But, the mother might feel much safer giving the milk to the baby through pumping, and then having someone who does not have the virus feed the milk to the baby. It very much depends on the mother's situation and level of sickness. If the mother is very ill, she will also have to wear a mask when interacting with the baby.

Do any extra precautions need to be taken if the mother is showing no symptoms?

Even if she is not showing symptoms, she can still transmit the virus to the baby. It is always better to follow all of the necessary precautions even if the mother is only suspected to have the coronavirus. If she is asymptomatic, some organisations would allow the mother to be in the same room as the baby, but with extra precautions such as a two metre distance between them when she is not breastfeeding.

As I mentioned before, there are many advantages, both short and long-term, for the mother and the baby. We should be stressing these advantages to the women. Breastfeeding is also one of the indicators of quality of care - a hospital that has 80% of it's discharged mothers breastfeeding versus only 10%...it is a matter of education, of the patient knowing the advantages outside of the nutritional benefit. There are many factors that can lead to this low uptake of breastfeeding. Some women state they were never told of the advantages, or they may have the perception that it is painful, or they may not want to due to cosmetic reasons.