Child Marriage is a Consistent Phenomenon

We hear from Dr Shaimaa Ibrahim, member of FIGO's Subcomittee on Refugees, about why child marriage is deeply concerning for her as an obgyn. 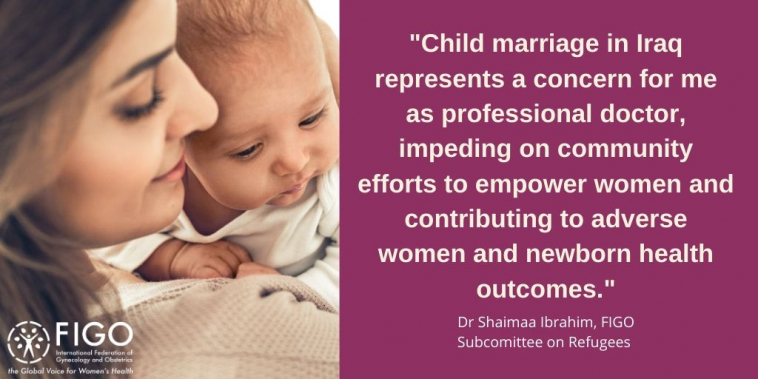 Child marriage in Iraq represents a concern for me as professional doctor, impeding on community efforts to empower women and contributing to adverse women and newborn health outcomes.

Most married young girls are descendants of poor families and they are disempowered and deprived from their right to choose their right partner, to work and to get their economic independency, in addition to experiencing the proven complications of early child births that are especially an issue for girls younger than 16.

According to the Multiple Indicator Cluster (MICS) Surveys conducted by government of Iraq/central statistic organisation (CSO) (round 4 in 2011 and round 6 in 2018), the percentage of women aged 20-24 years who were first married before age of 18 increased in Iraq from 24 to 27 % respectively.

Although the legal age of marriage by law in Iraq is 18, the law allows for an exception to this general rule and judges can authorize a marriage that they determine as an urgent necessity, or issue the contract of marriage by the father’s approval. Many young girls in Iraq get married by these exemptions from law, or get married with their parents’ approval outside courts through informal religious marriage.

There are many traditional social and cultural factors behind this phenomenon, including the idea of protecting girl through early engagement in formal relationships. Other factors include poverty, the protracted insecurity that Iraq witnessed in the last decades with the associated humanitarian crisis. All these factors forced many families to marry their girls early to help lower their overall cost of living, and to protect them (or so they thought) from the risk of violence including the rape. Child marriage represents a consistent phenomenon across all regions in Iraq. More common in rural than urban areas; the percentage of girls below 15 years who were married was 6.3% in rural areas versus 5.4 % in urban areas. It also represents a consistent phenomenon across all regions in Iraq. There is evident variation in the percentage of child marriage between wealthy and poor families, with it being more common among the poorest families. It causes drop out of education especially at the secondary school level, and it was reported in surveys that the enrolment of girls in primary education was nearly equal to boys but that when we reach secondary school engagement, girls have a higher rate of drop-out than boys.

The Government of Iraq is committed to addressing women’s health issues from human rights perspectives, including combating child marriage. This commitment was supported by all relevant UN agencies, NGOs, academia and professional societies. In 2010 the Ministry of Health introduced, with support from UN agencies (mainly UNFPA), the adolescent health programme which is a multi-sector programme that address all issues related to adolescent health and well-being, including dealing with early teenage marriage and childbirth.

In addition, the Government of Iraq and the United Nations launched in December 2018 a national strategy to combat violence against women, which was a significant step towards achieving women’s rights. This strategy provides an overall framework on which policy and decision makers will draw on to take concrete actions aimed at preventing violence against women and girls. In my opinion, this strategy will reassure Iraqi families that girls are protected from violence and can continue their education and get married at the right time, when they are empowered and feel they are in need to be engaged in a long stable relationship.

The role of Obstetricians and Gynaecologists

As a professional and member of the Iraqi Society of Obstetrics and Gynecology and member of FIGO’s Human Rights, Refugees and Violence Against Women committee, I advocate in my country for women’s health from a human rights perspective and I worked throughout my profession to orient families about the consequences of early marriage and childbirth on woman’s health, on women empowerment and how early teenage marriage can deprive girls from their rights to attain good health, education, and work opportunities.

I have addressed the issue of child marriage in Iraq several times during national meetings and conferences by presenting updated evidence related to this issue, highlighting the consequences of early marriage and suggesting approaches to combat child marriage as per global guidance.

I was part of a national team certified in 2010 as trainers for the adolescent and youth health program in Iraq by the MOH in collaboration with UNFPA and AUB. By this certificate, I conducted several training sessions for health care providers about the medical consequences of early marriage, suspected complications during pregnancy and childbirth, and its relation and proved contribution to maternal and neonatal mortality.

I worked as well for many years when I was assigned as a trainer for junior doctors to highlight the social and economic consequences of early marriage and child birth with its relationship to women empowerment and human rights, in addition to its suspected adverse medical outcome from early pregnancy and childbirth. My aim was to build team of future advocators from young professionals to combat this phenomenon.

Vision for the future

Since 1990 with the declaration of MDGs, there has been tremendous efforts to improve women’s health in Iraq by support from relevant UN agencies and international community. Progress has been made in this regard but wars, conflicts and the protracted humanitarian crisis hinder to certain extent this progress. Now Iraq is committed to achieve the SDGs targets by 2030. The MOH in Iraq prioritized women’s health issues in the national health agenda and adapted strategies from global initiatives to improve women health. Still, I do belief that Iraq is on track despite all challenges. The health professionals are working through ministry of health, academia, professional societies and NGOs to adopt global women’s health programmes and to synchronize their efforts for improving women’s health in Iraq. We continue to work for improving community orientation on women’s health issues in all settings including humanitarian settings, since women are more vulnerable in these settings and they need more attention to address their specific health issues and concerns. There is one main factor which is missing and requires specific attention in these efforts, which is community engagement. There are no specific interventions to engage communities in the planning and implementing of health care programs related to Women’s health.