FIGO at 65: our achievements

On our 65th Anniversary as a Federation, FIGO Past President Professor Gamal Serour reflects on FIGO's formative influence across critical women's health issues. 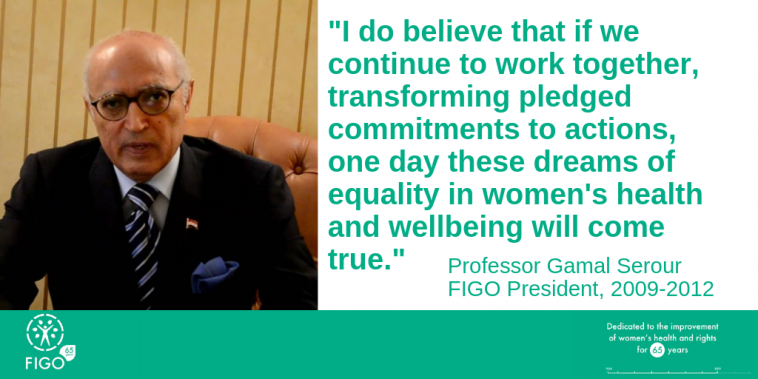 There has been enormous progress towards key indicators of women’s health since the early nineties, when I joined FIGO as a member of the Ethics Committee for Human Reproduction (now Ethical Aspects of Human Reproduction and Women’s Health).

Over the past thirty years the progress in some of the key indicators of women's health has been remarkable. Since 1990, we have seen a 44 percent decline in preventable maternal death, an overall decline in the prevalence of FGM and the global adolescent birth rate has declined from 65 births per 1000 women to 47 births per 1000 young women in 2015. From 2000 to 2015, the number of out-of-school children of lower secondary school, including girls, age shrank from 97 million to 62 million.

More women have become members of parliament, professionals, contribute to the workforce and participate in the development of their countries.

From 42 societies at our first meeting in Geneva in 1954, membership grew rapidly. Strengthening collaboration with professional peers, the private sector and the medical industry, and most importantly with the World Health Organization (WHO) and the United Nations, has been essential for raising OBGYN visibility at the global level.

During the past 65 years FIGO has worked tirelessly for women's values to be recognised in different societies, particularly in low income countries. One of FIGO’s greatest achievements has been defining and disseminating ethical values and guidelines for the OBYGN practice, particularly in reproductive and sexual health and reproductive rights. Improving diagnosis and management of various disorders of the reproductive system has been another landmark. FIGO must also be given credit for early recognition that infertility is an important component of sexual reproductive health and rights (SHRH).

Even more important has been leveraging these partnerships to bend back to the grassroots. Through capacity building of National Member Societies, educational activities and close collaboration across geographic, linguistic and cultural barriers, FIGO has strengthened the profession of obstetrics and gynecology, and by immediate extension, the quality of care we provide to women on a global scale.

Despite these achievements, there is still a huge unfinished agenda in women's health where FIGO is able to continue to strengthen, improve, monitor and audit global efforts to ensure that noone is left behind. The hopes, dreams and expectations of the 1994 International Conference on Population and Development (ICPD) in Cairo have not yet been fully achieved. Universal access to SRHR indeed is one of the corner-stones of population and development programmes, and there remains a large, unfinished agenda.

Every day, around 830 women die in childbirth; many of them are girls 15-19 years old. Approximately 650 million girls and women alive today were married before their 18th birthday and more than 200 million women do not have access to modern contraception. More than 3 million girls undergo FGM every year, one third of women are victims of gender-based violence in their lifetime.

In 2015, the international community adopted the 2030 Agenda for Sustainable Development, reaffirming its commitment to the global plan of action for 'People, Planet and Prosperity'. This agenda is now central to FIGO's mission, and I do believe that if we continue to work together, transforming pledged commitments to actions, one day these dreams in women's health and wellbeing will come true.

In the years to come let us all look ahead to a world with zero unmet need for modern contraception, zero preventable maternal and child mortality, zero FGM and child marriage and zero violence against women.