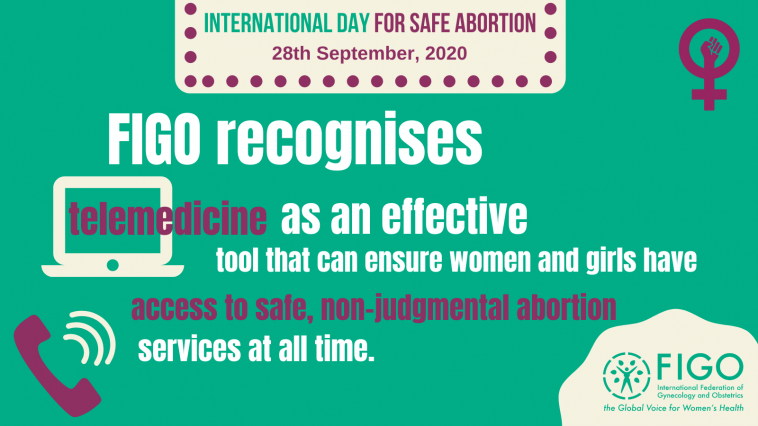 28 September 2020: on the 100th anniversary of the first law to legalise access to abortion, FIGO stands in solidarity with the international safe abortion campaign calls to strengthen access to telemedicine/self-managed abortion.

In recent months Alexandra Kollontai’s name has been shared within the reproductive rights community. It was Kollontai’s visionary leadership that led to Russia being the first country in the world to legalise abortion in 1920.

Along with Kollontai’s role we recall the leadership of another visionary: in November 2006, Dr. Dorothy Shaw, the then newly elected-FIGO President, rose to make her inaugural address:

‘…The evidence is clear. Restrictive laws on abortion have clearly been shown to increase maternal mortality. The highest abortion rates are in countries with no legal access to abortion and restricted access to contraception…

If we look at the evidence, it is clear that unsafe abortion is a problem that affects poor women in countries where abortion may be legal or illegal. How can we prevent these senseless deaths and disabilities? Can we come to a place of understanding, so that we can save women's lives literally and broadly? Women who resort to unsafe abortion are desperate, poor, uneducated, have no access to financial resources, have no power to negotiate in their sexual relationships… How does blaming women and prosecuting them solve this problem? …

With those words Dr. Shaw declared that the prevention of maternal mortality due to unsafe abortion was to be one of her key priorities, thus laying the foundation for FIGO’s initiative to address unsafe abortion and its consequences which has evolved into FIGO’s Advocating for Safe Abortion project.

2020: 100th anniversary of the world’s first law that legalised abortion

This year, as the COVID-19 pandemic continues to grip our global community and further exacerbating the inequalities of the most marginalised women and girls, FIGO, in solidarity with the international safe abortion campaign, calls on governments around the world to ensure access to safe abortion for women and girls is guaranteed.

Telemedicine is a safe and private way to have an abortion in early pregnancy without having to visit a clinic, reduces exposure to stigma and increases access to services for women and girls living in remote communities. The evidence is clear that an in-person meeting is not essential to the provision of safe and effective abortion services, with the World Health Organisation recommending that women can safely self-manage medical abortion in circumstances where they have access to appropriate information and to health services should they need or want them at any stage of the process. FIGO recognises telemedicine as an effective tool that can ensure women and girls have access to safe, non-judgmental abortion services at all times.

New data from countries such as England and Wales, where telemedicine for abortion was introduced as a temporary measure during the COVID-19, illustrates that women were successfully able to self-manage their abortion. Further evidence on telemedicine and self-managed abortion also highlights the benefits for task-sharing among health professionals, which places less strain on (already over-stretched) public health systems.

FIGO advocates that all governments acknowledge that abortion is time-sensitive essential healthcare, respect, protect and fulfil women’s reproductive rights, support women’s autonomy over their own lives, and ensure universal access to safe abortion – both during COVID-19 and afterwards.

Women will always need abortions. Whether they can access them safely and with dignity depends upon every one of us to rise to the challenge to provide them.

‘Unsafe abortion results in 13 percent of maternal mortality worldwide, with hundreds of thousands of survivors living with long-term complications, including infertility and chronic pain. Of these unsafe abortions, 97 percent take place in South-Central Asia, sub-Saharan Africa and Latin America.’

On the 28th September 2020 FIGO endorsed Amnesty International’s updated abortion policy which reaffirmed that FIGO regards reproductive choice, including access to safe abortion services, as a basic and non-negotiable tool for ensuring the human rights of every woman, girl and pregnant person, not just in one country or region, but globally.

Over the coming days we spotlight the work of our OB-GYN member societies in low-middle-income countries, and the activities and innovative approaches they are employing to stand in solidarity with the  International Safe Abortion Campaign and address stigmatisation of abortion as part of the Advocating for Safe Abortion project. Examples will include:

How OB-GYNs are engaging with adolescent DJs in Zambia to provide accurate information and address questions from young people on safe abortion – starting dialogues where young people are at.

We will learn from our OB-GYN colleagues in Cote D’Ivoire and the initiatives they have organised, recognising quality journalism on the theme of safe abortion.

From our OB-GYN colleagues in Benin we will learn of their peoples’ carnival which aims to promote the importance of safe abortion in Benin.

From OB-GYNs in Cameroon we will learn of the collective power of bringing diverse stakeholders together to explore ways to strengthen women/girl-rights-centred safe abortion. Keep visiting our website to find articles about these activities being published in the next days.

Details of FIGO’s 28th September activities and resources including the recording of our webinar on Telemedicine (available in 3 languages) and downloadable infographics and other resources are available here.

Broad social and economic grounds: 380 million women of reproductive age (23% of women of reproductive age) live in 14 countries where the laws are generally interpreted liberally to permit abortion under a broad range of circumstances. These countries often consider a woman’s actual or reasonably foreseeable environment and her social or economic circumstances in considering the potential impact of pregnancy and childbearing.