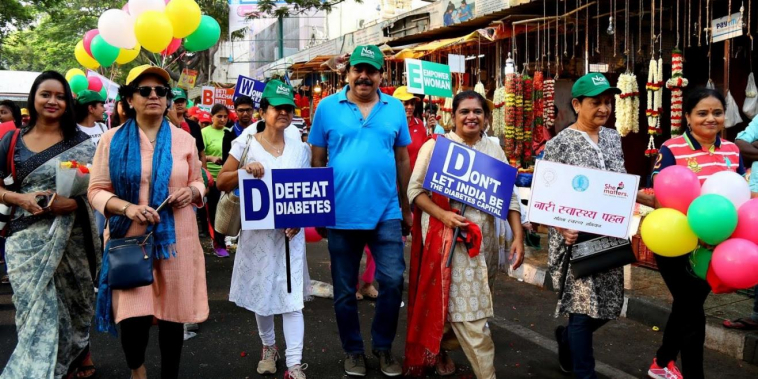 In low-resource settings, gender inequity compounds the burden faced by girls and women with diabetes: barriers in accessing prevention, detection and treatment and care, and stigmatization for those with a diagnosis.

The challenge is particularly relevant – and often traumatic - for cases of hyperglycemia in pregnancy (HIP). More than 2.1 million die from diabetes each year, the ninth leading direct cause of death in women globally.

This World Diabetes Day, FIGO reaffirms our call for greater attention to the link between maternal health and non-communicable diseases in the Sustainable Developmental Goals (SDG) agenda. Dr Hema Divakar, FIGO Executive Board, FOGSI ambassador to FIGO, and co-chair of FIGO’s Committee on Pregnancy and Noncommunicable Diseases, shares what this means on a human level for her patients, and how they have made her a passionate advocate.

“Five years ago, when the practice of testing every pregnant woman for diabetes was still very new, I had a young girl – just 22 years old – who tested positive.

She, her partner and her family went into strong denial. Why had I tested her in the first place, they asked. It was faulty reporting, unnecessary testing – ultimately she opted out of my care and consulted a senior doctor in the city. That doctor convinced her the baby was growing well and she had nothing to worry about.

Unfortunately her pregnancy ended in a stillbirth.

She came back to me a few months later, pregnant again, and this time subjected herself for all the tests I asked for. She was really disciplined about lifestyle choices, took insulin injections, and delivered a healthy baby.  She now has two lovely children and is forever grateful for the counselling and care provided.

This is why I’m so passionate about the treatment and management of diabetes in pregnancy. It’s complicated, but it’s a wonderful opportunity to achieve a good outcome for both the mother and the baby.

I remember also a woman, 30, who came to my clinic with her first pregnancy and had a miscarriage around 10 weeks. The woman’s mother burst into tears and told the story of her own first pregnancy, fifty years ago. She lost the baby in the ninth month, but doctors said ‘it happens sometimes’ and did not test her for sugar levels.

In her second pregnancy, they detected diabetes at seven months, treated her with insulin, and her son survived. Her third pregnancy – with her daughter, my patient - the doctor didn’t listen to her and wouldn’t check for sugars. She was born with very high levels, and high doses of insulin.

The woman cried and asked: could her daughter also have high sugar levels? Was that the reason for the miscarriage? Could she have done something about this before, and why had no one told her that her daughter could have high sugars at the early age of 30?

After explaining to her that the child of a mother with gestational diabetes (GDM) could more easily get childhood obesity and early adulthood diabetes, she said:

“So I could have had my daughter’s sugars checked prior to pregnancy, and taken due care control levels and get her a good outcome…?”

That’s why I’m passionate to leave no stone unturned in addressing this issue. Doctors and families were not aware a few decades ago, but the situation is improving. There is obviously a large role for advocacy on this issue, across all age groups, but it all begins in the womb. There’s a long-term impact for two lives - and future generations!"