In numerous outbreaks and epidemics, pregnant women have been denied opportunities to receive vaccines that would have protected them and their offspring from the dangers of communicable diseases. 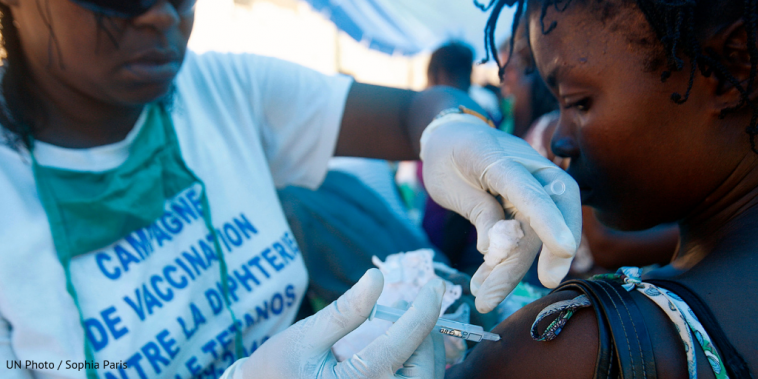 Vaccine hesitancy – the reluctance or refusal to vaccinate despite the availability of vaccines – was identified as one of the World Health Organization (WHO)’s ten threats to global health in 2019.

However, FIGO calls attention to a group which is more often actively excluded from vaccine campaigns and vaccine research: pregnant and lactating women.

Vaccine-preventable infectious diseases are responsible for significant maternal, neonatal, and infant morbidity and mortality, but the vast majority of new vaccines are designed without pregnant women in mind. Recent epidemics, including Zika virus, Lassa Fever, Ebola, and H1N1 influenza, have brought the lack of evidence related to vaccination for pregnant and lactating women to wider public awareness.

Limited evidence for a cautious approach

Changes in a woman’s own immune system during pregnancy may increase her risk from infectious diseases – sometimes severely, and at times uniquely.

Even when an infectious disease is no worse in pregnancy, the harms of infection in pregnant women can potentially affect two lives. Neonates and premature infants have immature immune systems, making them particularly vulnerable to infection; immunisation of pregnant women can directly protect the foetus against vaccine-preventable infections.

It is extremely important that pregnant women and children are involved in vaccine research. Vaccinated pregnant women can be protective for two generations at the same time.

However, concern that those changes in immunity may interfere with the development of a specific immune response means that pregnant women are usually not included in vaccine research or clinical trials. Manufacturers may fear liability should something go wrong, shy away from methodological challenges, or fail to investigate existing precautionary guidelines. This in turn has limited the ability to make evidence-based decisions and provide optimal guidance on the use of vaccines in this population.

In numerous outbreaks and epidemics, pregnant women have been denied opportunities to receive vaccines that would have protected them and their offspring from the dangers of communicable diseases.

Vaccination in an epidemic

Traditionally there has been concern about using live virus vaccines for pregnant women, due to the theoretical possibility of the virus crossing the placenta and infecting the foetus. However, because live viral vaccines are used in mass vaccination campaigns, inadvertent vaccination of pregnant women has been documented.

In the most recent outbreak of Ebola in the Democratic Republic of the Congo, pregnant women were initially excluded from receiving an investigational vaccine. But in February, a committee advising the Ministry of Health recommended that women who are pregnant and lactating, as well as children under the age of one, be vaccinated as part of an ongoing ring vaccination strategy.

This change in policy was noted and recommended by SAGE, WHO’s Strategic Advisory Group of Experts (SAGE) on Immunisation. Said Tarik Jasarević, a WHO spokesperson:

“It is really between risk and benefits and we hope that the use of the vaccine in pregnant women will generate some data for the future.”

The burden of Ebola in pregnant women remains uncertain due to the low numbers of patients affected in previous outbreaks and limitations in data collection during the current epidemic; but in the two previously published case series, the estimated Ebola case fatality ratio was approximately 90 percent.

The impact of maternal survival on newborn and child health is well-documented. WHO has advised that the benefits of vaccinating pregnant women generally outweigh the potential risks, if they are at high risk of being exposed to a particular infection and the disease would pose a risk for the woman or her unborn child, and if the vaccine is unlikely to cause harm.

A new roadmap for women

Although great strides have been taken to decrease the maternal mortality ratio, women across the globe are still dying as a result of complications during pregnancy and childbirth. The appalling statistics casts an even wider shadow: as WHO points out, it may be difficult to dissociate risks inherent in pregnancy from those associated with a vaccine.

Knowledge of background rates of poor pregnancy outcomes, as well as the knock-on effects of epidemics to a healthcare system which can further reduce access to quality maternity care, is therefore critical when assessing adverse events after vaccination.

FIGO has previously addressed the ways that poor, inconsistent data can hinder progress towards better health worldwide – particularly for women and children – and once again we see on the issue of vaccines in pregnancy that limited available data has a serious public health implication.

In spite of the complexity, one thing is certain: pregnancy carries specific healthcare needs, but it cannot be a barrier to a woman’s right to the highest standards of health and wellbeing. This must include her right to essential vaccines.