FIGO catches up with Dr. Ines Boaventura, Project Coordinator for the Advocating for Safe Abortion Project at the Associação Moçambicana de Obstetras e Ginecologistas in Mozambique. 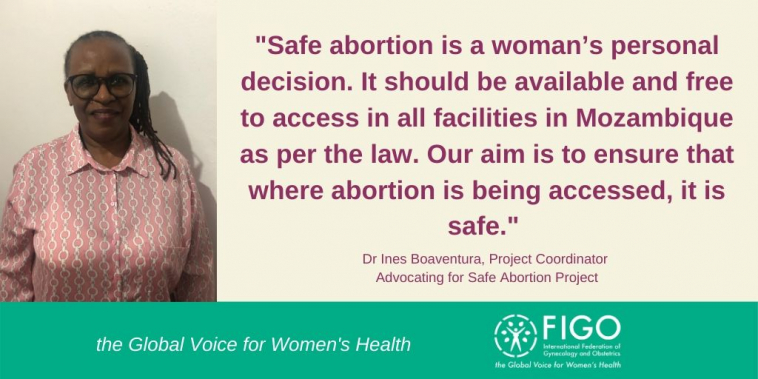 Mozambique liberalised its abortion law in 2014, granting legal abortion on request in the first 12 weeks of pregnancy, and longer term limits in cases of rape, incest and foetal anomaly.  FIGO National Member Society, The Associação Moçambicana de Obstetras e Ginecologistas (AMOG), was proud to support this change in law.

Clinical norms to guide treatment were also made available, and benefitted from AMOG’s technical expertise while being developed. However, barriers that prevent women accessing abortion care remain; although we have the law in place, it is often not being implemented.

Our experience is that although the law has changed since then, these avoidable deaths are still happening, with an estimate that 11-18 percent of hospital maternal deaths are due to unsafe abortion, the same figure as in 2008.

AMOG is still committed to making a difference today Our society is partnering with FIGO on the Advocating for Safe Abortion Project. We will be working with our members, who are present in every province of Mozambique, to train them and other healthcare providers on the law and clinical norms.

We are supporting the generation of better evidence and data, through partnering with universities and the Ministry of Health to facilitate better understanding of the issue and the barriers to law implementation.

One barrier to change is a lack of knowledge and understanding of the law and where safe abortion is available. Many communities do not know how to ask for support, or don’t know the terms of when safe abortion will be offered. Stigma around abortion, and also sexual health and rights more broadly, mean women often do not have a support network of families or communities to help provide guidance. We are therefore also supporting journalists to write accurate and engaging stories about safe abortion, and disseminating messages to communities, to help sensitise and change social norms.

As an Obstetrician Gynecologist working in Mozambique, what motivates me to advocate for safe abortion are the stories of women and girls who are suffering the consequences of the lack of services and information.

A 14-year-old girl from Inhambane Province One example is a 14-year-old girl who realised she was pregnant, but was scared to tell anyone or go to the hospital because she was worried about facing stigma from her family and community. As an adolescent, she also did not have her own resources to travel there by herself, or enough knowledge of the law and the services that should have been available to her, to understand where to turn.

As time went by, she did eventually attend the Province hospital, and requested a termination. Unfortunately, by this time her pregnancy had passed the term limit in Mozambique, so she was turned down. Desperate, she turned to an unsafe abortion. Two weeks later, she developed a fever, discharge and abdominal distension. Her condition was so severe that she was referred to the Central Hospital. She had developed septicaemia and severe injuries to her uterus and bowel which meant they had to be removed. Unfortunately, the treatment was not enough to save her and she passed away six days later.

Mozambique is a large country Sadly, our country sees higher rates of poverty in rural areas. There are many communities who have no other option but to travel a long way to reach healthcare facilities. Finally, there is still work to do in ensuring all qualifying healthcare workers are trained to be able to provide safe abortion in line with the law, and are aware of their responsibility to do so.

To prevent avoidable deaths from unsafe abortion, it is crucial we focus on implementing the law, and disseminating the clinical norms. Communities also need to be sensitised and helped to overcome stigma.

To be successful, it will be necessary for AMOG to work in partnership with the Ministry of Health, and we are committed to support their goals of reducing maternal mortality and morbidity. Safe abortion is part of a wider package of increasing sexual health and rights that we support and champion.

I hope in two years’ time at the end of the FIGO Project, we will have been successful in supporting the Ministry of Health to implement the law and the clinical norms, and have reduced maternal mortality due to unsafe abortion.

Safe abortion is a woman’s personal decision. It should be available and free to access in all facilities in Mozambique as per the law. Our aim is to ensure that where abortion is being accessed, it is safe.

Find out more about FIGO’s Advocating for Safe Abortion Project which is working with ten National Member Societies here.