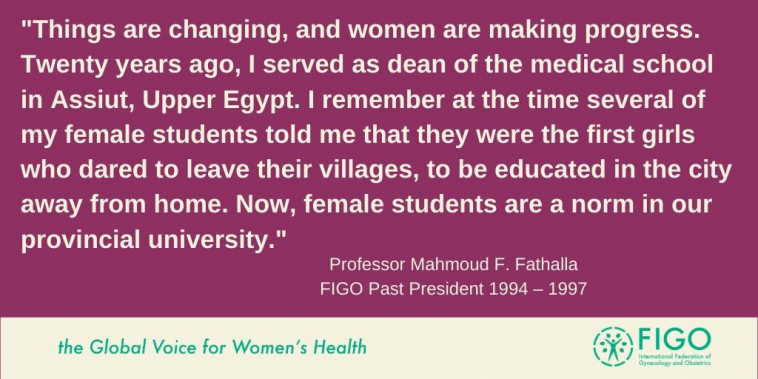 When the issue of giving girls a chance comes up, the face of one of my patients jumps up from the back of my memory. Let me briefly talk about her. I had three professional encounters with her over a long period of years.

When I first saw Sayyeda, she was in the company of her mother and elder brother. She was about 13 or 14 years old. She did not go school. She didn’t have a job. She was recently married. I remember she wore a beautiful dress with many bright colours. Her husband had already left, shortly after marriage, to one of the Gulf States, where he was earning a living as a manual labourer.

The reason why they came to see me was that she missed her last two periods. I proceeded to examine her. She had had the usual genital cutting. They were all happy when I confirmed to them that she was pregnant.

To me, her happiness looked as the happiness of a child given a new toy. She was a child, and maybe she was happy to be seen as now joining the ranks of adult women. I did not see her for some time after that. But I was keen to inquire from relatives in her village about the outcome of her pregnancy. I was somewhat worried because I knew that her bony pelvis was not yet fully mature and may cause difficulty in labour. But I was told she had a safe delivery at home.

The next time I saw Sayyeda was many years later. I did not recognize her at first. There was nothing left of the cheerful joyous playful child. I now saw a maternally depleted woman with an anxious worried face.

She had already had six deliveries. Two of her children, both boys, died in their first year. She had three living girls and one boy. Her husband was still working abroad, visiting for two months every year or two. Each time he visited, she got pregnant. But the last two visits went by without her getting pregnant.

After examination, I told her that another pregnancy would be risky. She said, and I still remember the words: “it is not me who wants”. Her husband wanted more children, especially boys. He now had money and could afford to marry again if she did not get pregnant. She insisted on going through an infertility investigation and treatment. Since she was now in the high risk category we obstetricians call grand multiparity, I advised her that her next baby should be delivered in hospital.

The third time I saw her was two years later, and in hospital. I was making the ward round with the residents, and they pointed out to me an emergency case admitted the night before. There was Sayyeda. I still remember her pale face, her shrivelled hair, and the look on her face, a look difficult to describe, difficult to forget.

She had obstructed labour after a long suffering at home. She was delayed in going to hospital because she needed the approval and help of her in-laws, which hadn’t been given until it was almost too late. When she arrived at hospital, her uterus had already ruptured and she had severe intra-abdominal haemorrhage. It was a near miss, but her life was saved by blood transfusion and emergency surgery to remove her uterus.

Pregnancy should always be a dignified informed choice, by a woman who is empowered to make her own decisions. I have no doubt that if Sayyeda had been given a chance to have some education, if she had the capacity to earn some living by herself if needed, and if she had the power to make choices in her life, things would have been different.

Why was she not given these chances? There are many girls like her in this world and the situation varies in different countries. In her case, in Egypt, we were in a country where the government has been trying to improve things, through laws and services. Female genital mutilation is punishable by law. School primary education is, theoretically at least, compulsory and free for boys and girls. Marriage of minors below the age of eighteen is banned. Family planning services are supposed to be free for those who cannot afford them. District hospitals are reasonably accessible. The biggest barrier Sayyeda faced was within her own community.

The lesson to me is that it takes more than building a health centre or changing the law to bring about social change. It is civil society working in and working with communities that can bring change from within.

Things are changing, and women are making progress. Twenty years ago, I served as dean of the medical school in Assiut, Upper Egypt. I remember at the time several of my female students told me that they were the first girls who dared to leave their villages, to be educated in the city away from home.

Now, female students are a norm in our provincial university. When I look at their happy faces, I hope that the daughters of Sayyeda are among them and that they were given all the chances that their mother was denied.

This article is an edited version of a speech delivered by FIGO Past President (1994 – 1997) Mahmoud F. Fathalla at the International Planned Parenthood (IPPF) in London in November 2001.