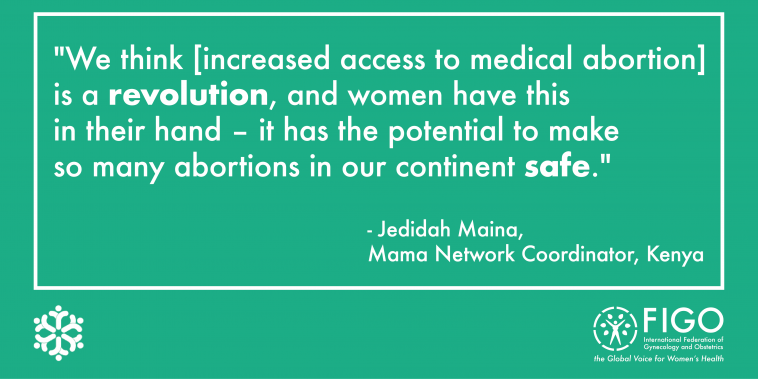 On 18th March 2021, FIGO – in collaboration with the Centre for Reproductive Rights and Ipas – organised a discussion on ‘Access to medical abortion and self –managed abortion. Key insights from health workers and human rights advocates: on guaranteeing human rights’ with United Nations treaty monitoring committee members and Special Procedures mandate holders.

These elected UN experts have a responsibility to interpret human rights treaties, which includes monitoring states’ compliance with their legally binding human rights obligations and recommendations from UN experts. This includes reproductive rights and access to safe abortion. The UN experts do this by conducting fact-finding missions and issuing progress reports and statements, in addition to conducting review meetings with governments to assess their progress.

The discussion was moderated by Patty Skuster, Senior Legal Advisor at Ipas, and Christina Zampas, Associate Director, Global Advocacy at the Centre for Reproductive Rights. Ms Skuster began by clarifying the definition of medical abortion as ‘a non-invasive and highly acceptable option to pregnant persons. Medical abortion can be provided using tablets of mifepristone and misoprostol in combination or misoprostol alone,’ and the term self-managed abortion as ‘when the pregnant person finds the medication and the information on how to use it and on how to assess eligibility, progress, and outcome by themselves without the intervention of a health care provider.’

Insights were then shared by guest speakers:

The speakers highlighted the key legal barriers to medical abortion and self-managed abortion which include:

They provided solutions on how access to medical abortion and self-managed abortion could be strengthened for women and girls.

‘There is a large body of evidence on safety and efficacy of medical abortion from all over the world - both from high and low income countries….Mifepristone and misoprostol have been moved to the “core” Essential Medicine List and the requirement for close medical supervision is removed.’

Dr Ganatra presented a visual timeline of the evolving evidence and recommendations on medical abortion from WHO. 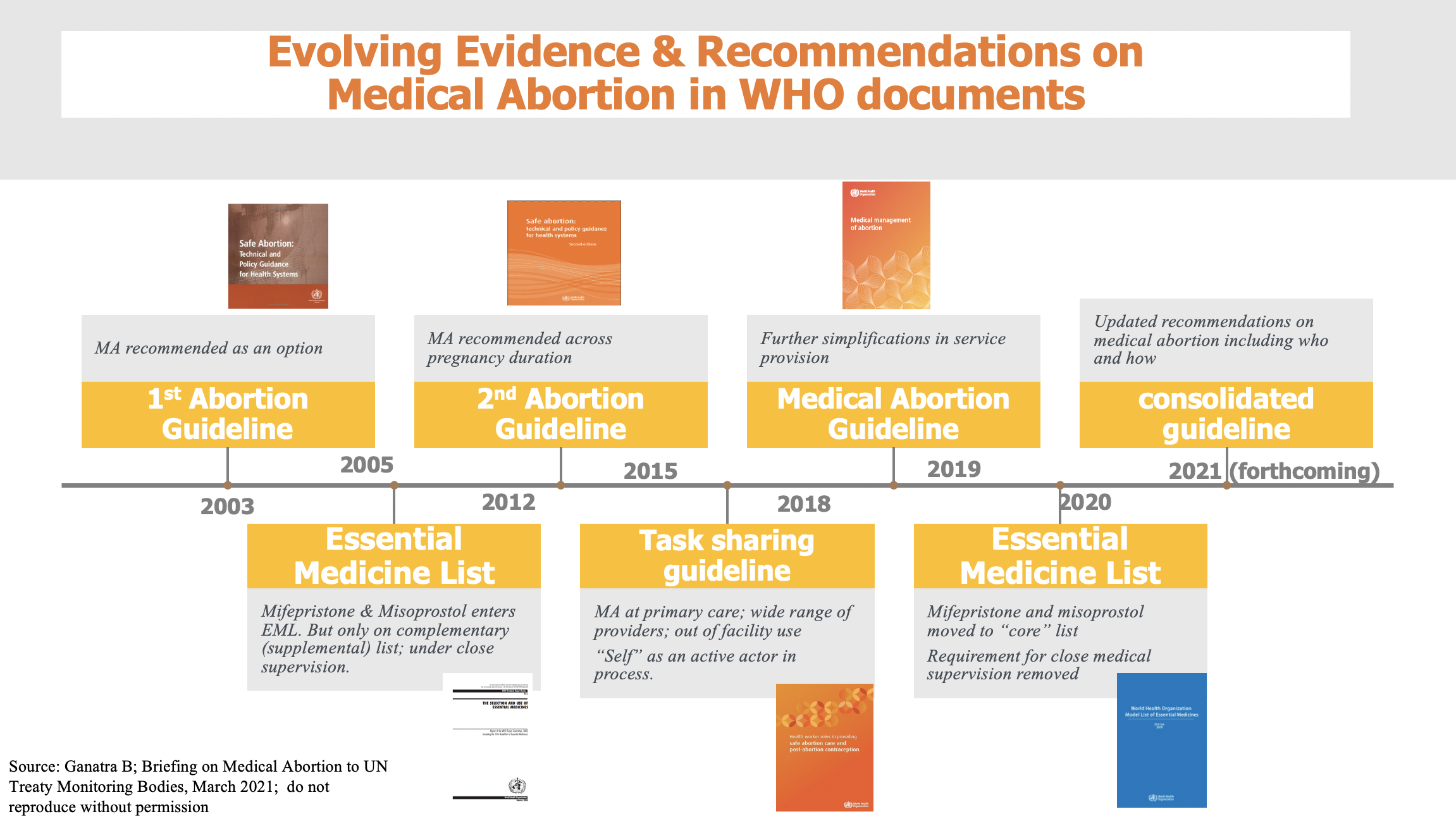 Dr Ganatra stressed that the science on who can provide the medical abortion tablets and under what conditions medical abortion tables can be provided has been progressively evolving over the last 20 years. WHO guidelines from 2015 already identified the various roles of different health care providers, including lay workers and pharmacists and the pregnant person themselves in different aspects of abortion care. Since then, more scientific evidence has been generated on this topic and work is ongoing to update these recommendations. The new WHO abortion guidelines are likely to be available later in the year (also see current WHO abortion guidelines).

Dr Nafissa Osman provided key insights from the perspective of Africa and specifically her home country, Mozambique. She began by highlighting how 25 million unsafe abortions took place each year between 2010 and 2014, and that 45% of all abortions are unsafe. 97% of unsafe abortions take place in Africa, Asia and Latin America, and the risk of dying from an unsafe abortion is highest in Africa.

‘Medical abortion is a very safe treatment and in clinical trials, success rates are between 92.5% and 100% depending on gestational age, the time interval between Mifepristone and Misoprostol, the misoprostol administration route and doses.’

Yet, while medical abortion is very safe, Dr Osman highlighted that in Africa there is still much to do to make access to safe abortion a reality for women and girls. Only 3 of 55 African countries allowed abortion upon request (up to varying pregnancy durations). These are Mozambique, South Africa and Tunisia.

But even when abortion is available upon request there are often barriers to access. For example, in Mozambique, abortion must be carried out in the health units of the National Health Service, by health professionals, and requires sign-off/approval from health workers. Such protocols serve as barriers in ensuring access to abortion for women and girls, especially the more marginalised.

‘There are many barriers/challenges to accessing abortion at the health facility level. This includes the implementation of the law, policies and guidelines which is often slow, the role of service-providers’ own personal values, beliefs, and attitudes which may stigmatise women/girls requiring an abortion, and the lack of functional safe abortion services (including trained staff, supply of drugs) – includes the availability of free, accessible and acceptable safe abortion service… These barriers then adversely impact marginalised women/girls' access to safe abortion, especially those from poor and marginalised sectors who are at greater risk to high levels of violence and unsafe abortion.’

Dr Osman concluded her presentation by stating that FIGO endorsed the permanent adoption of telemedicine abortion services, which is a safe and private method to have an abortion in early pregnancy without having to visit a clinic. It helps to reduce exposure to stigma and increases access to abortion services for women and girls living in remote communities.

Sabin Shrestha, Nepal, shared that despite access to abortion being recognised as a fundamental right in Nepal’s Constitution and enacted in Nepal’s legislation, women and girls were still being imprisoned if they took medical abortion tablets from a health service provider and/or health setting not on the government's approved list. He shared the case details of a 15-year-old (minor) rape survivor who had been arrested and imprisoned for taking medical abortion tablets that had been provided by her father via a pharmacist.

Jedidah Maina, Kenya, who coordinates the Mama Network, a grass-roots activist network that works to expand medical abortion across Africa and operates in 17 sub-Saharan African countries, stated that:

‘There continues to be cultural taboos that prevent open dialogue in homes and in school and sometimes our laws and policies do not mirror the lived realities of women/girls… the law criminalises self-care/abortion management… We [Mama network] increase access to medical abortion as a safe, effective medical procedure outside a clinical setting… we think this is a revolution, and women have this in their hand – it has the potential to make so many abortions in our continent safe and that States need to adapt their laws to reflect this lived reality of people who have abortions.’

Questions that UN experts should raise with governments

The discussion concluded with specific questions that UN experts could raise with governments when assessing their progress on ensuring access to safe abortion. These included:

The attendees (UN experts) were also encouraged to advocate that all governments decriminalise all abortions by completely removing abortion and any regulation of abortion from criminal or penal codes. Further details on the recommendations that UN experts could advocate for are available from the meeting presentation, and you are able to watch the recording here.

FIGO urges its member societies to utilise these recommendations in your advocacy with governments and stakeholders, in order to strengthen advocacy for safe abortion within your national contexts.