This month, FIGO celebrates 65 years as a federation committed to improving the health and wellbeing of every woman worldwide. 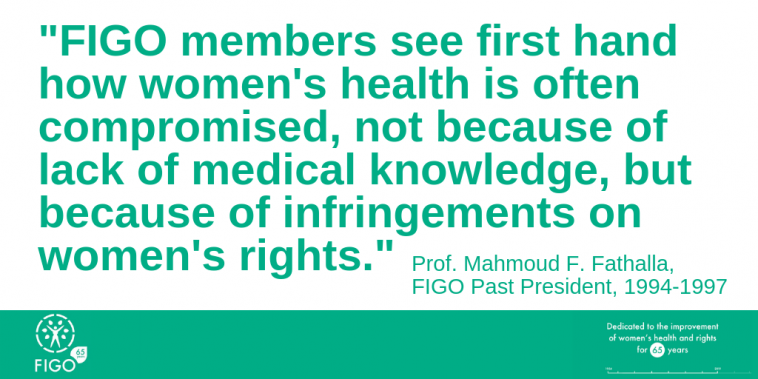 Professor Mahmoud F. Fathalla, FIGO Past President 1994-1997, has spent his career documenting, researching and advocating for women’s health and rights. Here, he reflects on the changes, challenges and vision for FIGO’s future.

"Across the decades of my career, I have seen how international approaches to critical issues of women’s health - particularly reproductive health and choice - have changed.

The first United Nations International Conference on Population (ICPD), convened in Bucharest in 1974, upheld the slogan that family planning is the solution. Ten years later, the second ICPD in Mexico City put forward that development is the solution, development is the best contraceptive pill. The third conference, in Cairo in 1994, when I became president of FIGO, recognised these and more. It upheld the importance of family planning, the importance of development, but affirmed a greater truth: women are the solution.

My generation of women's health professionals has been fortunate to witness how women across the world, empowered by family planning, were able to regulate and control their fertility, broadening their life choices and pursuing a productive and not only a reproductive career. So when concerns about population growth are raised, FIGO has a critical role to play in explaining that in spite of all the rhetoric, women in many countries around the world still have a large unmet need for family planning.

Women also have need of safe abortion. Millions of women around the world risk their lives and health to end an unwanted pregnancy, but the controversy surrounding it tends to obscure its dimension as a health problem. Laws that allow legal termination of pregnancy only when the life of the mother is in danger paradoxically put the life of the mother in danger. Unsafe abortion is one of the great neglected problems of health care, and a serious concern to women during their reproductive lives.

“Mothers are not dying because of diseases we cannot prevent or treat. They are still dying because societies have yet to make the decision that their lives are worth saving.” I made this observation many years ago, and sadly it remains a glaring, inconvenient truth. Progress has been made and should be applauded, but in many countries, maternal deaths are still a major health scandal. Mothers are left to die undertaking the risky process of giving us a new life; to die when their lives can be saved.

As the Nairobi Summit on ICPD25 approaches, my message will be: take care of women’s health and rights, and the ‘population problem’ will take care of itself.

If the world needed evidence about the health hazards for women denied equality and empowerment, the AIDS pandemic provided a hard lesson. What started as a mostly male epidemic has now left women, particularly young girls, more vulnerable.

Women do no need "big brother" to dictate decisions for them about what to do with their own bodies. They can be trusted to make informed decisions about their reproductive health, and their decisions should be respected and implemented. It should be a responsibility of the whole international community to ensure that women, wherever they are, are given a choice in their lives and are given the means to implement their choice.

This is where our FIGO stands.

Our profession is more than a medical technical specialty, only to deliver babies and fix pelvic organ disease. We see first-hand how women's health is often compromised, not because of lack of medical knowledge, but because of infringement on women’s human rights. As we mark 65 years of FIGO's work to improve the wellbeing of all women, we renew our commitment to a future where every woman is empowered to achieve active participation in her own health and rights.